GSPCA returns seals to the wild off Jethou

TWO young seals have found their place back in the wild after being released on Jethou. 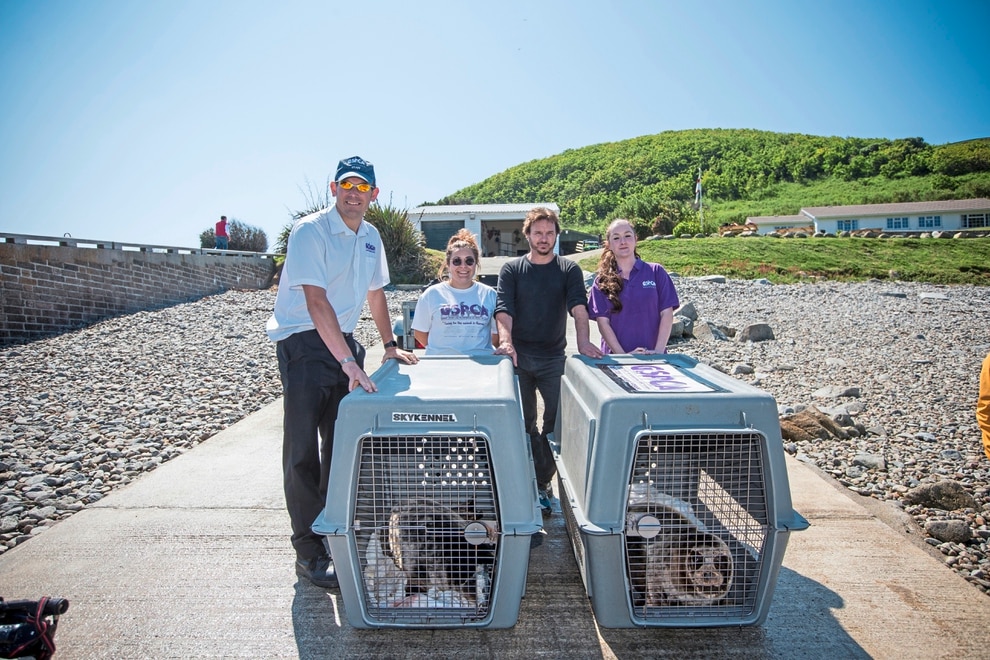 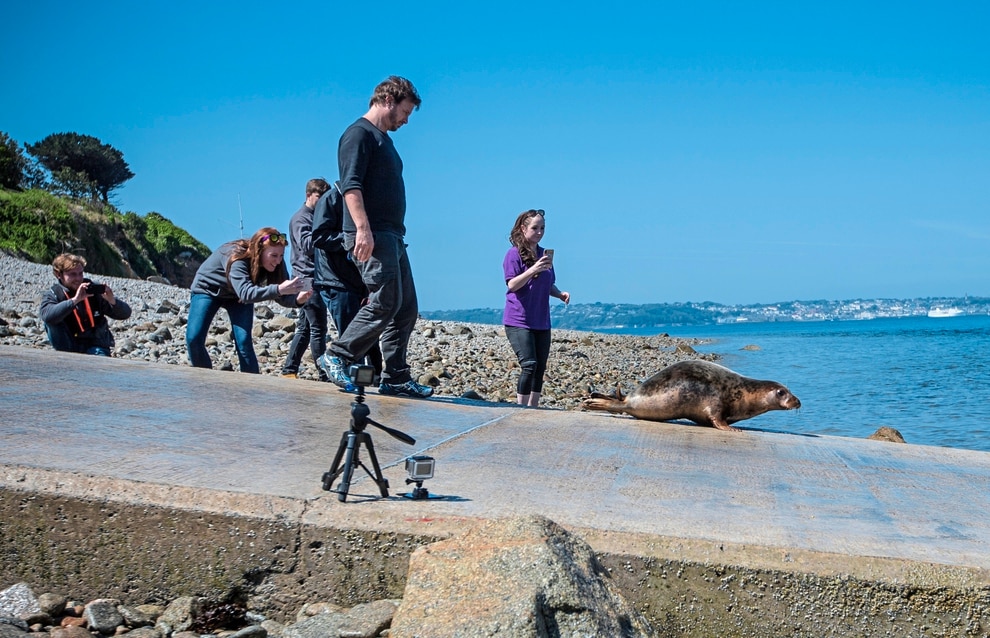 GSPCA's Geoff George and Sebienne Goman, right, watch as one of the seals makes its way to the water. (24723566) 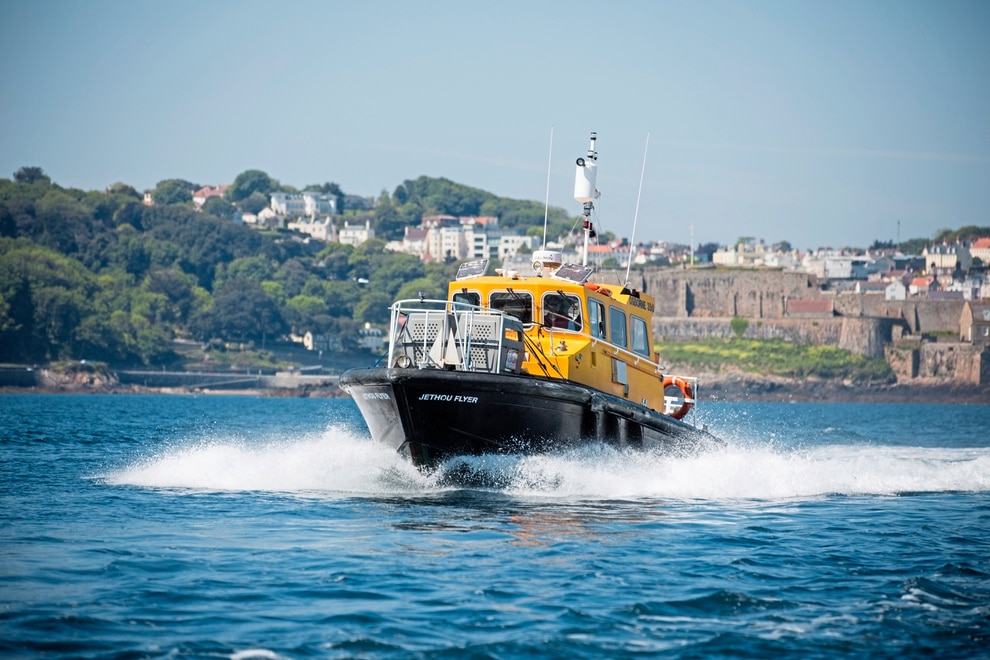 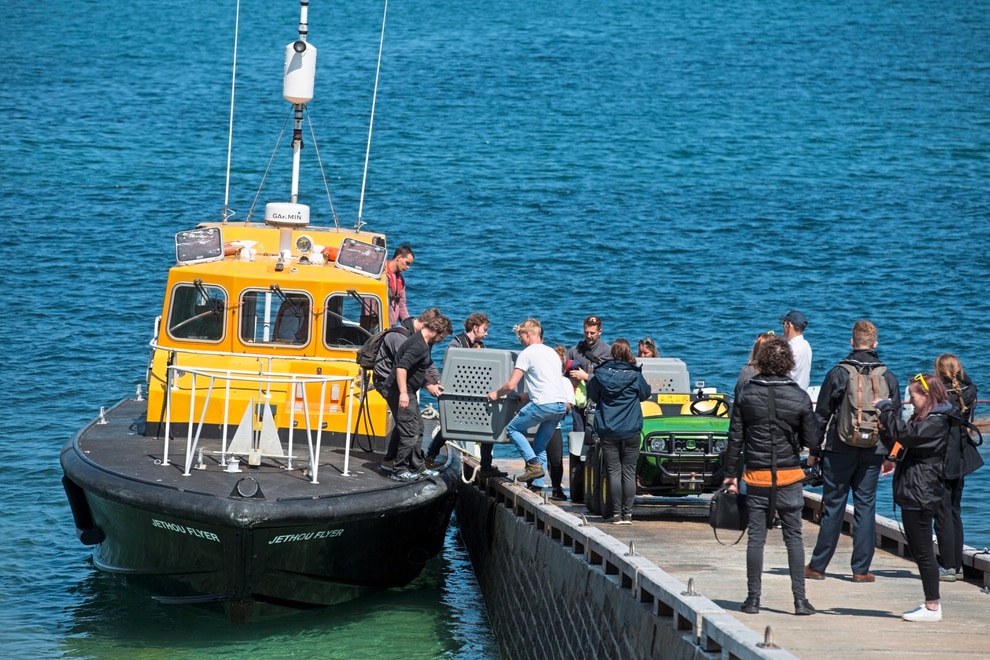 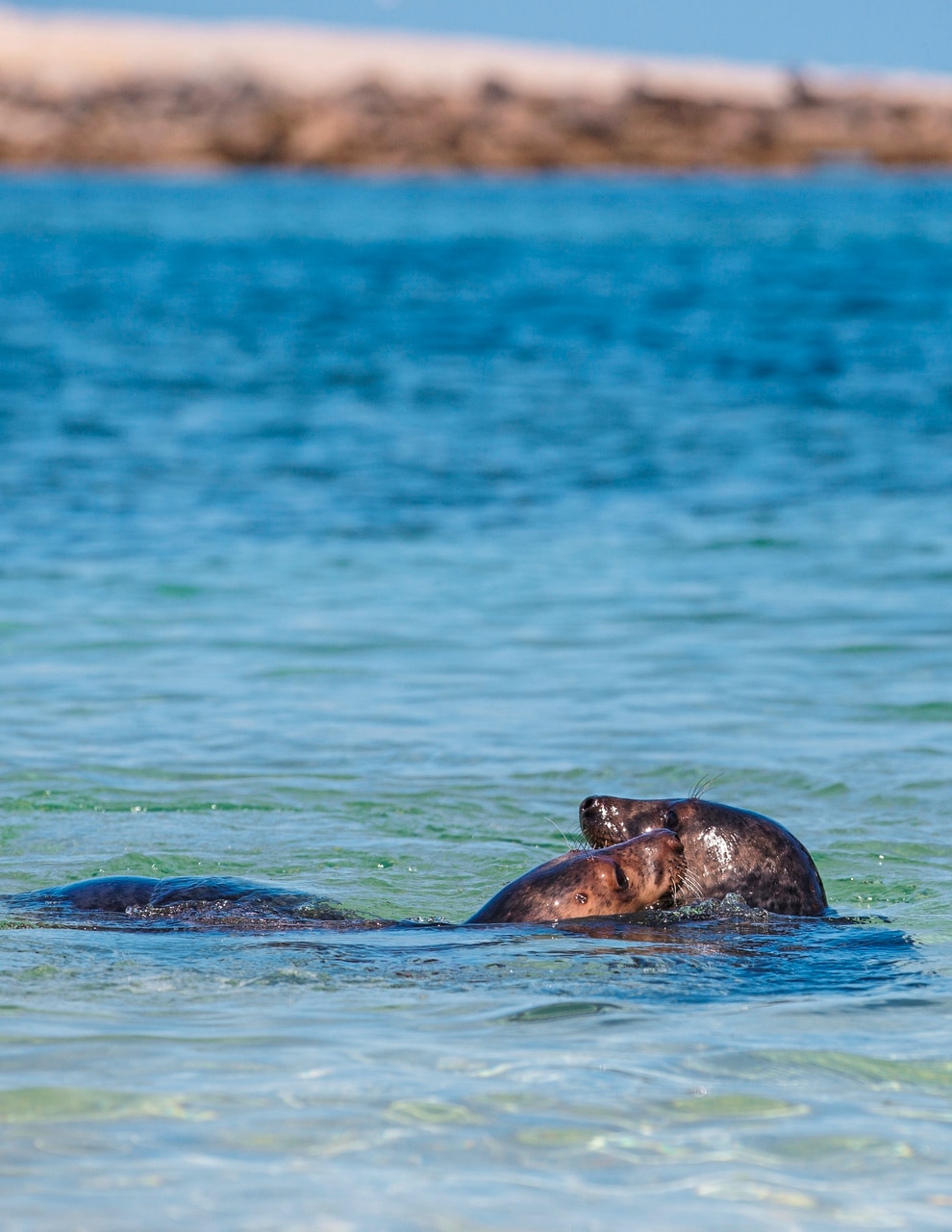 Sealia and Gully back in the sea after months in the care of the GSPCA. (Pictures by Peter Frankland, 24723607)

Sealia and Gully, joined by the GSPCA staff who restored the pair to health, were escorted by Island Rib Voyages and released from the Jethou slipway.

The seals were two to three weeks old when first brought to the shelter but are now between five and 10 months and still growing.

Among GSPCA staff to watch the release was animal collection officer and head of marine mammals Geoff George.

‘It’s sad to see them go, but they’ve promised to keep in touch over seal-mail,’ he said as he watched the pair play in the shallows of their wild home.

‘Sealia is up to 48kg and Gully 54kg, so both are four times their rescue weights, so are all ready to be released.

‘They’ll probably stay around here [Jethou] for a little while,’ he said.

‘Both of these were underweight when we had them, they had pneumonia as well so it was a fight.

‘Dehydration is the real killer because then they can’t dive as well and can’t catch as many fish.’

Manager of the GSPCA Steve Byrne was present for the pups’ release.

‘Both were extremely emaciated when they were rescued and it is wonderful to see how well they are now.

‘Geoff’s done an amazing job – caring for them every two hours when they first came in.’

Mr Byrne said as the seals got stronger they moved on to liquid and then solid fish.

He said the public had been great in supporting the shelter to feed the seals.

Mr Byrne said it was great to be able to release the seals in the safe location of Jethou.

‘We are very grateful to Jethou and Island Rib Voyages for making it possible to release them here.

‘This is so magical, it’s such a special moment and it doesn’t go away. It’s every time we see them go back in the water.

‘I think for every one of us, this is why we do the job.

‘For domestic animals it’s finding new homes, for wild animals it’s getting them back out where they belong.’

Mr Byrne said this was why a new on-site wildlife hospital was essential.

The new hospital would be able to cater for more seal pups with four seal rooms instead of the current one that has been split in two.

‘We’ve had six seal pups this winter, we’ve never had so many in our care for so long, they used to go to the UK.’

Following the release of Sealia and Gully, three seals remain in the shelter’s care and Mr George believes two of them will be released in the next three to four weeks.

Mr Byrne said often the reason seals need help from the shelter is because of problems caused by humans.

‘Some people might see the cute fluffy seal pup and want to get closer and not realise mum is nearby and scare her off.

‘Dogs off the lead may also get too close and separate mum from pup.

‘Also plastic pollution – every week we have animals brought into the shelter because of things people have done.’

The shelter will be at this weekend’s Seafront Sunday event, where islanders can learn more about the work the GSPCA does and how to support them.

Embarrassing debate to be avoided