Development in La Pointe field ‘will be harmful to biodiversity’

RESIDENTS petitioning the Development & Planning Authority and the States to save La Pointe field from development have been backed by deputies. 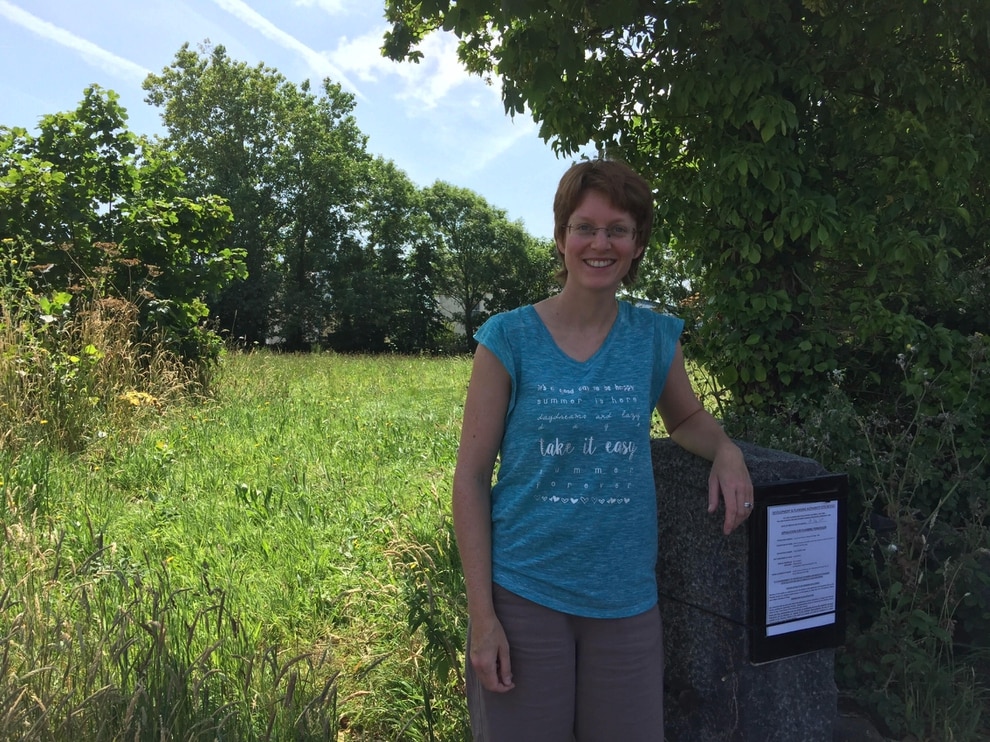 Andrea Page, who is a next-door neighbour to La Pointe field, where the proposed development would be constructed, is against green field development anywhere. (25251164)

Residents want the DPA to prevent any development of the site and have started a new petition against the proposals.

‘Since 2013, 94 dwellings have been built or had permission approved in the Braye road area,’ the petition states.

‘It’s madness to add to the increased traffic they’re causing. If you agree you should sign this petition, lobby your deputies for an Open Planning Meeting, and most importantly, put in representations to the Development & Planning Authority before the consultation period ends on the 24 July.’

A Hillstone spokesman said they would be making improvements to the area as part of the development.

Vale deputy Matt Fallaize said he was concerned about the plans: ‘I have already submitted an objection to the DPA pointing out several reason why this green field should not be developed,’ he said.

‘One reason is that developing green fields needs to be resisted, especially where there are brown field sites close by.’

‘As a Vale deputy I received many representations regarding the much-loved field and met with neighbours to help them in their representations (and made representations myself) against the previous planning application, which was quite rightly dismissed by the planning authority,’ she said.

‘Although the new application is a vast improvement on the “astro-turf” rabbit hutches of the previous development, I believe it still falls short of some elements of the IDP and will be objecting to it on those grounds.

Deputy Laurie Queripel said he would sign the petition and lodge his own objection: ‘This filling in the blanks exercise, in other words the continual threat of the few remaining green fields/spaces being built upon in already densely developed areas where their presence provides such a welcome and necessary relief and contrast should be resisted. These fields and green spaces have environmental and amenity value.’

But the Hillstone spokesman said he felt the petition failed to highlight the improvements they would be making.

‘What this petition fails to highlight is that we plan to replant as many trees as we remove, plus several hundred linear meters of mixed native hedging,’ he said.

‘In addition, we plan to widen the Braye Road junction to improve the sight lines for exiting cars, install a bus stop, located back from the pavement edge and install a foot path to Mares Pellees Lane to improve traffic and pedestrian safety. These landscaping and infrastructure improvements will benefit the residents for many years to come.’

Environmental concerns were at the heart of the worries of residents.

Andrea Page lives next door to the field. Her husband Mark counted 46 trees in the site and, if the plans go ahead, 36 would be removed: ‘It is not just because I live beside the field, I am against green field development everywhere in the island,’ she said.

‘We expected him to reapply, after spending around £400,000 on the site, but my personal opinion is that green field developments are harmful to biodiversity – especially in a time where we are trying to be conscious about the environment.’

Mrs Hill lives opposite the field and is tired of seeing development in the north.

‘We haven’t got many spaces like that, it has been so lovely to have that view and the quietness away from the traffic,’ she said.

‘I think why is it always in St Sampson’s and the Vale that they want to do this – they’ve already built a massive amount of houses here. My daughter lives up in Castel and there are so many fields and nobody seems to be developing those.’

n The plans can be viewed at Sir Charles Frossard House.

The petition can be viewed at https://bit.ly/2JC4smJ.