DESPITE torrential rain and stormy conditions, one islander completed his debut triathlon quicker than expected and raised more money than he hoped to. 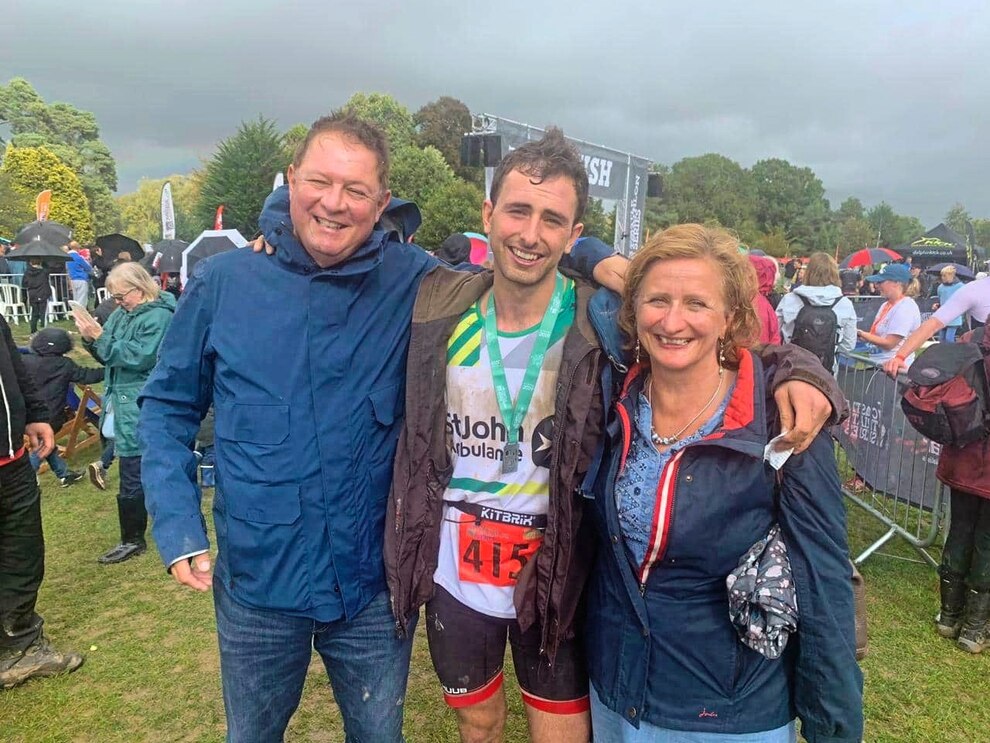 Charlie Denton, centre, with his dad Rick and mum Linda after the Hever Castle Triathlon. Charlie took part to raise money for St John and the Cardiac Action Group and to raise awareness about how important it is to be first aid trained. (Pictures supplied by Charlie Denton) 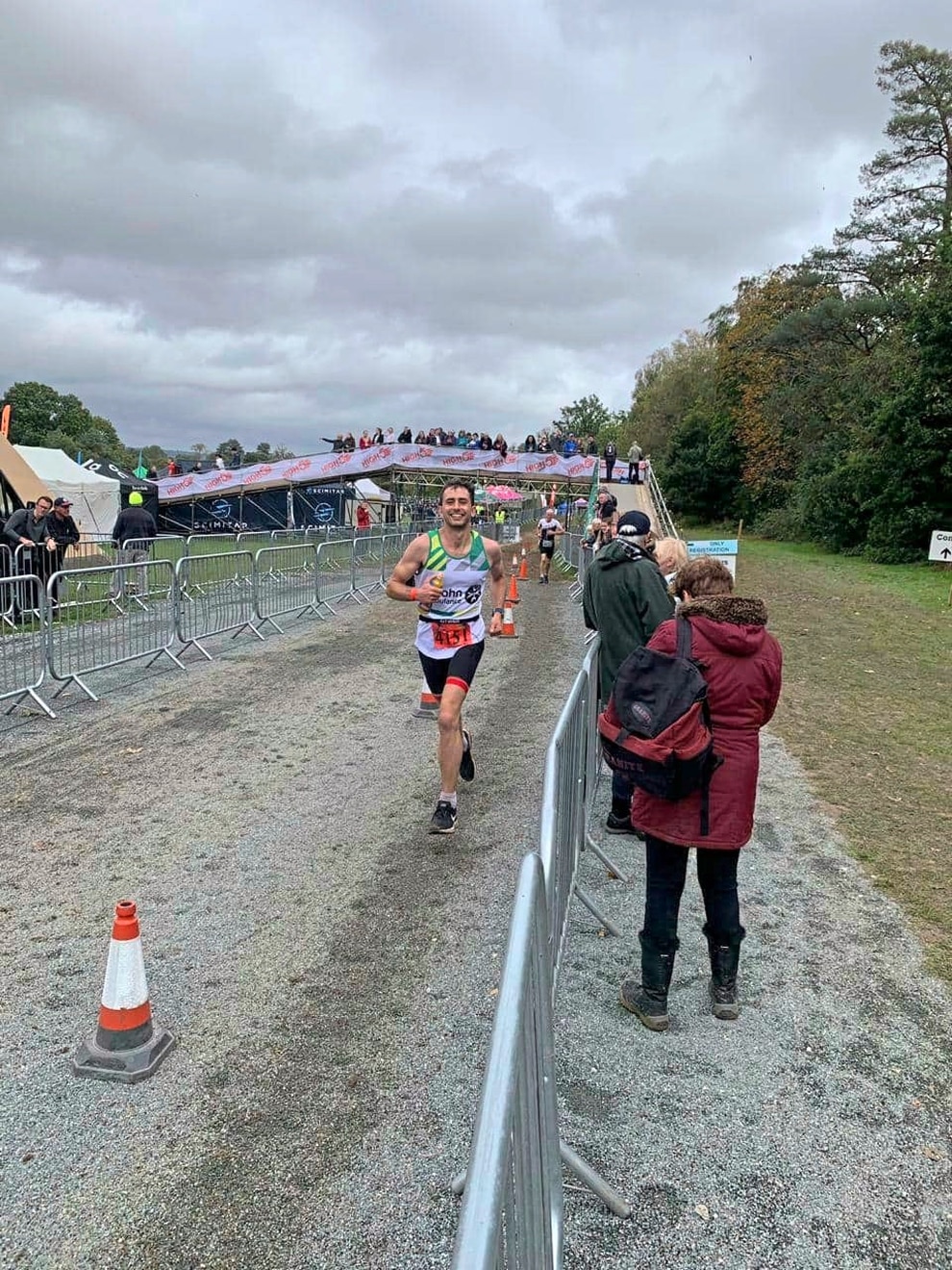 Charlie Denton wore a St John vest as he took part in the Hever Castle Triathlon to raise money for St John and the Cardiac Action Group. 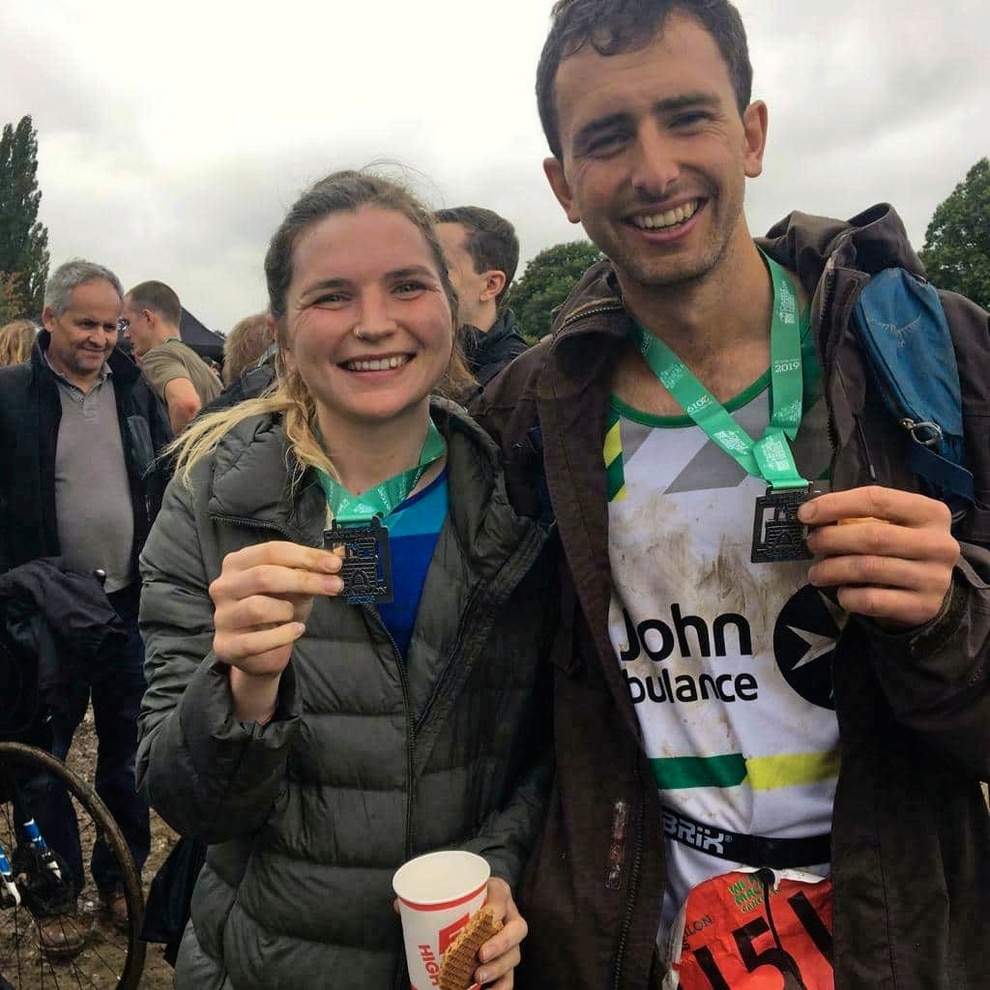 Charlie Denton’s father, Rick, suffered a cardiac arrest at Les Cotils earlier this year and was saved by two first aid-trained members of the public and the St John training manager, who was in an office nearby.

They performed CPR and applied an automated external defibrillator, bringing Mr Denton back to consciousness before St John Emergency Ambulance staff had arrived.

Charlie Denton said he was keen to give something back.

‘These fantastic people, to whom I owe a debt I will never be able to repay, brought dad back to life in less than three minutes,’ he said.

To show his appreciation, and to raise money for St John Ambulance Service and the Cardiac Action Group, the 24-year-old took part in the Hever Castle Olympic-length triathlon, beating all his expectations by finishing 34th in two hours and 34 minutes.

‘I was pretty pleased with that, considering it was my first triathlon and I didn’t follow a proper training programme,’ he said.

‘I’m not sure I’d be ready to commit to another tri tomorrow if it’s on offer, although a friend of mine is training for a half-Ironman next year, so we’ll see if I can be persuaded to join – hopefully it won’t take another family emergency to get me to sign up for one.

‘The important part is of course the total raised, which now stands at £1,300 and should hopefully really help the work of St John and CAG.’

He hoped sharing his story would inspire more people to get trained in first aid defibrillators because effective bystander CPR provided immediately after sudden cardiac arrest can double or triple a victim’s chance of survival.

If a defibrillator is used within three to five minutes of cardiac arrest, the survival rate jumps from 6% to 74%.

Mr Denton said competing for such good causes was definitely a great motivation and helped him overcome a few set-backs in training.

‘Hearing people cheer on from the sidelines really kept me going.

‘I did get a little emotional thinking about my dad watching me at one point, although that could also have been because it felt like the bottom half of me was on fire during the running section.’

Knowing his girlfriend, Niamh Murphy, had signed up to the triathlon earlier in the year inspired Mr Denton’s athletic challenge, aided by the rather competitive streak that runs through him.

‘I’m really proud of Niamh’s achievement as well, she could hardly ride a bike at the start of the year and did so well to complete her triathlon in three-and-a-half hours,’ he said.

Miss Murphy raised nearly £400 for Macmillan Cancer Research and was a big encouragement throughout the training period.

‘What makes his fundraising so special is the personal story behind it. It shows the value of learning first aid skills and the importance of knowing CPR.’

‘The money will contribute towards the cost of a defibrillator and replacement parts of mannequins, which are used in training,’ she said.

. To read more about Charlie Denton’s story and to donate, visit https://bit.ly/2klspVz.

Dentist is pleased to be able to reopen practice to patients 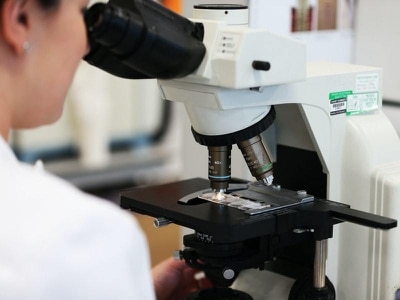