‘We will make changes to do our bit in climate emergency’ Policy & Resources president Deputy Gavin St Pier accepted the students’ petition and asked them if they would be prepared to give up the convenience of travelling by car. (26414151) 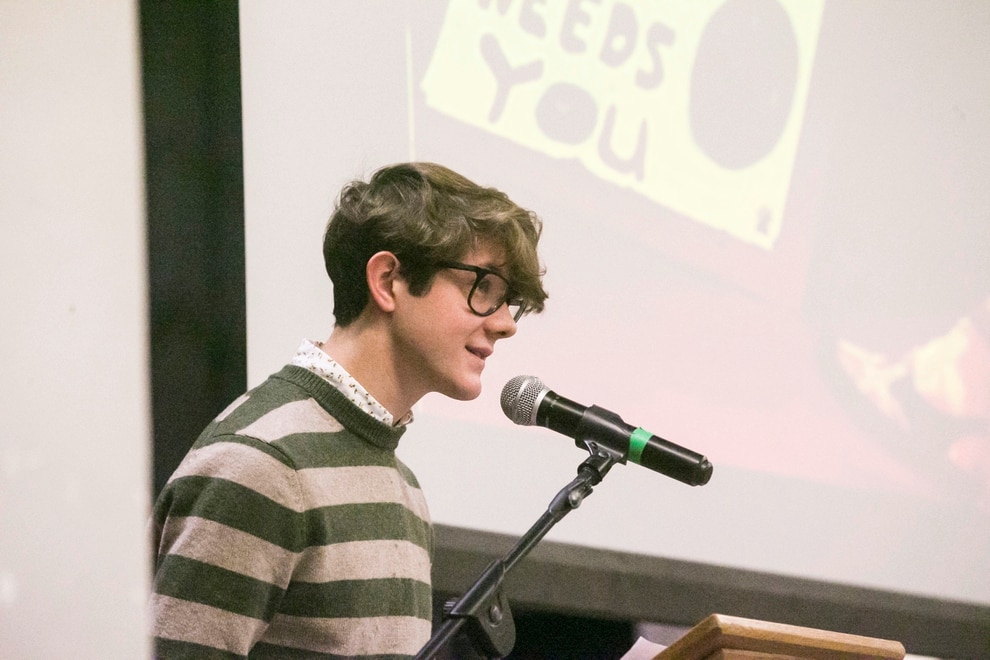 James Cleal, 18, called on his fellow students to encourage their parents to take fewer holidays by air as aviation is a big contributor to greenhouse gas emissions.(Pictures by Adrian Miller, 26414149)

The young people are determined to keep up the pressure for a sustainable future, following an event in September which saw around 1,000 students march from the Grammar School to the Royal Court building.

A petition signed by nearly the whole school was handed over to the island’s senior politician, Gavin St Pier, in assembly yesterday.

It called for the island to cut its greenhouse gas emissions to net zero by 2030, and for a far-reaching local climate change action plan.

The students themselves have acknowledged they have to play their part, and have agreed to eat less meat, take fewer flights, recycle clothes and not buy fast fashion.

Charlotte Cleal, 16, said there was no time to lose and everyone needed to do their bit.

‘We want to start driving that individual change in our society, and one of the ways we are going to do that is the student voice leadership team is working towards meatless Mondays in the canteen at the Grammar School and other States schools.

‘And regarding fashion, there are lots of sustainable brands around nowadays, and charity shops. Oxfam is really good, or make your clothes yourself.

‘If we don’t sort out this colossal problem there will be nothing else left, we will be basically facing impending doom, it’s the defining issue of our generation.’

The assembly coincided with World Children’s Day, and James Cleal, 18, said young people had to use their voices.

‘Aviation is a huge contributor to greenhouse gas emissions, so we need to encourage less flights, so talk to your parents when they’re planning holidays. France is lovely.’

Deputy St Pier received the petition enthusiastically and commended the students for their hard work in raising the profile of the issue.

In a speech to the assembly he agreed that the matter was a responsibility for everyone, and he asked the students if they would be prepared to give up the convenience of the car and allow more space for cycle lanes and pedestrians.

He hinted at possible resistance to meeting the students’ demands because of the ‘need to carry the community with us’.

Lindsay de Sausmarez, a member of Environment & Infrastructure, also spoke in the assembly, and she did not sugarcoat the matter, outlining that hitting net zero carbon emissions would change everything from transport to domestic and industrial energy systems, food production to overall levels of consumption.

E&I is working on a climate change action plan, and Deputy de Sausmarez promised students that they were being heard.

‘The plan will explore practical measures, so it’s not empty rhetoric, you absolutely cannot call a climate change action plan empty rhetoric because it’s all measures that we can take.’