RARE photos of one of the world’s biggest pop stars when he visited Guernsey have flummoxed the man who found them. 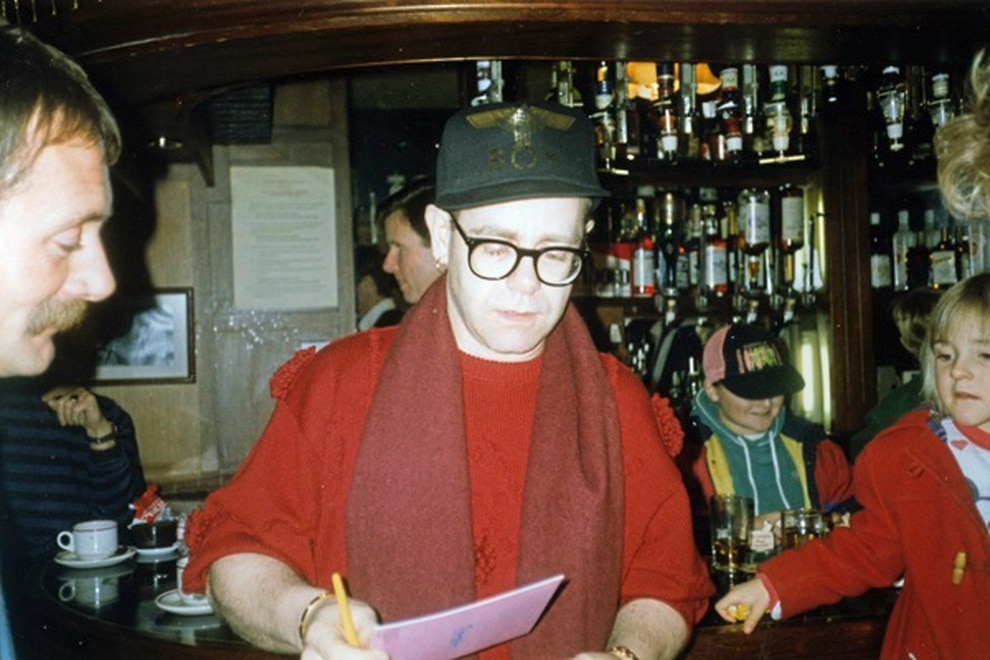 Sir Elton John at the Fermain Tavern in 1990. 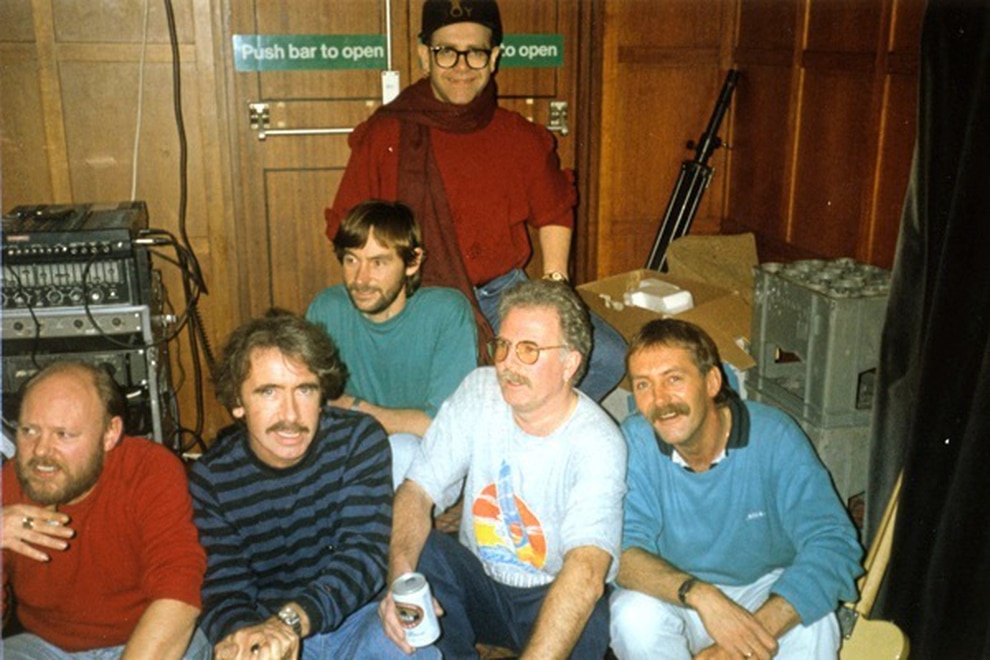 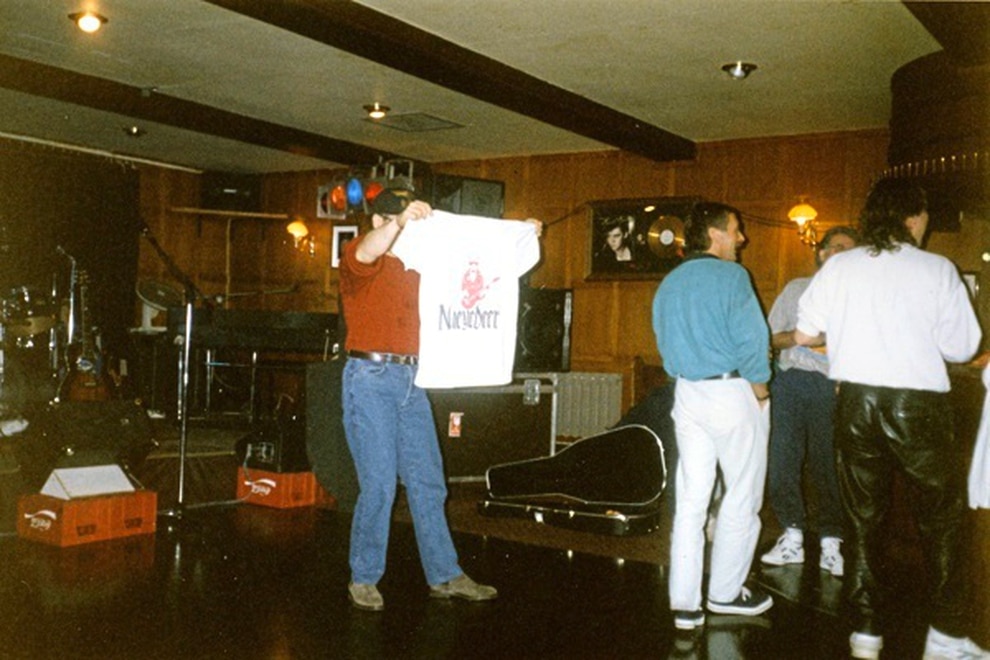 Sound engineer Mark Guillou presented Sir Elton with a T-shirt for his band, Noeyedeer. But he has never seen the rock star wearing it. 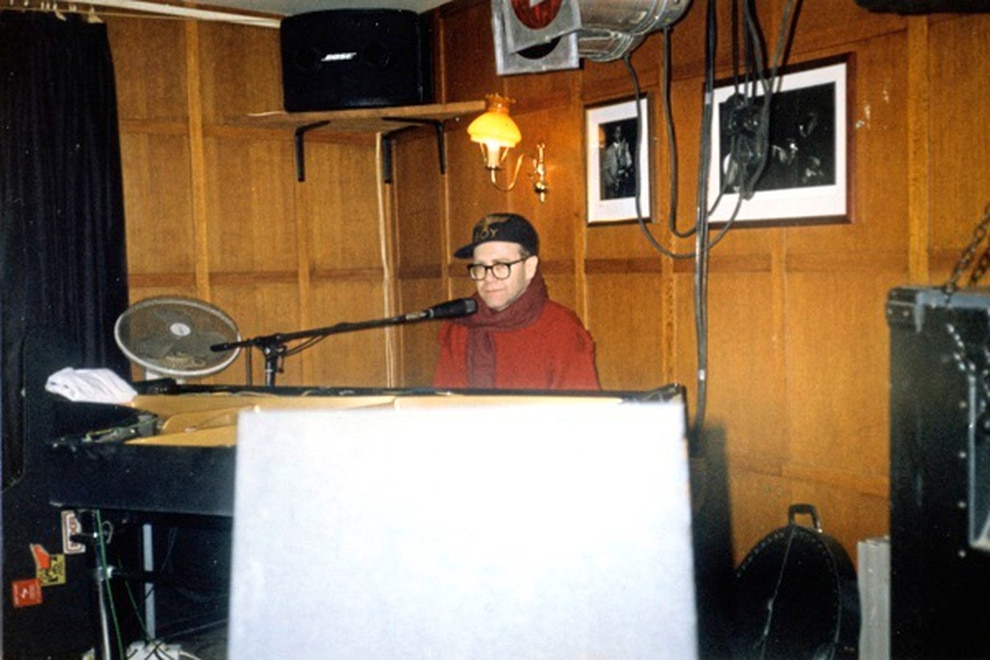 He’s sold out most of the world’s major music venues, but, for one night in 1990, Sir Elton John was at the Fermain Tavern. 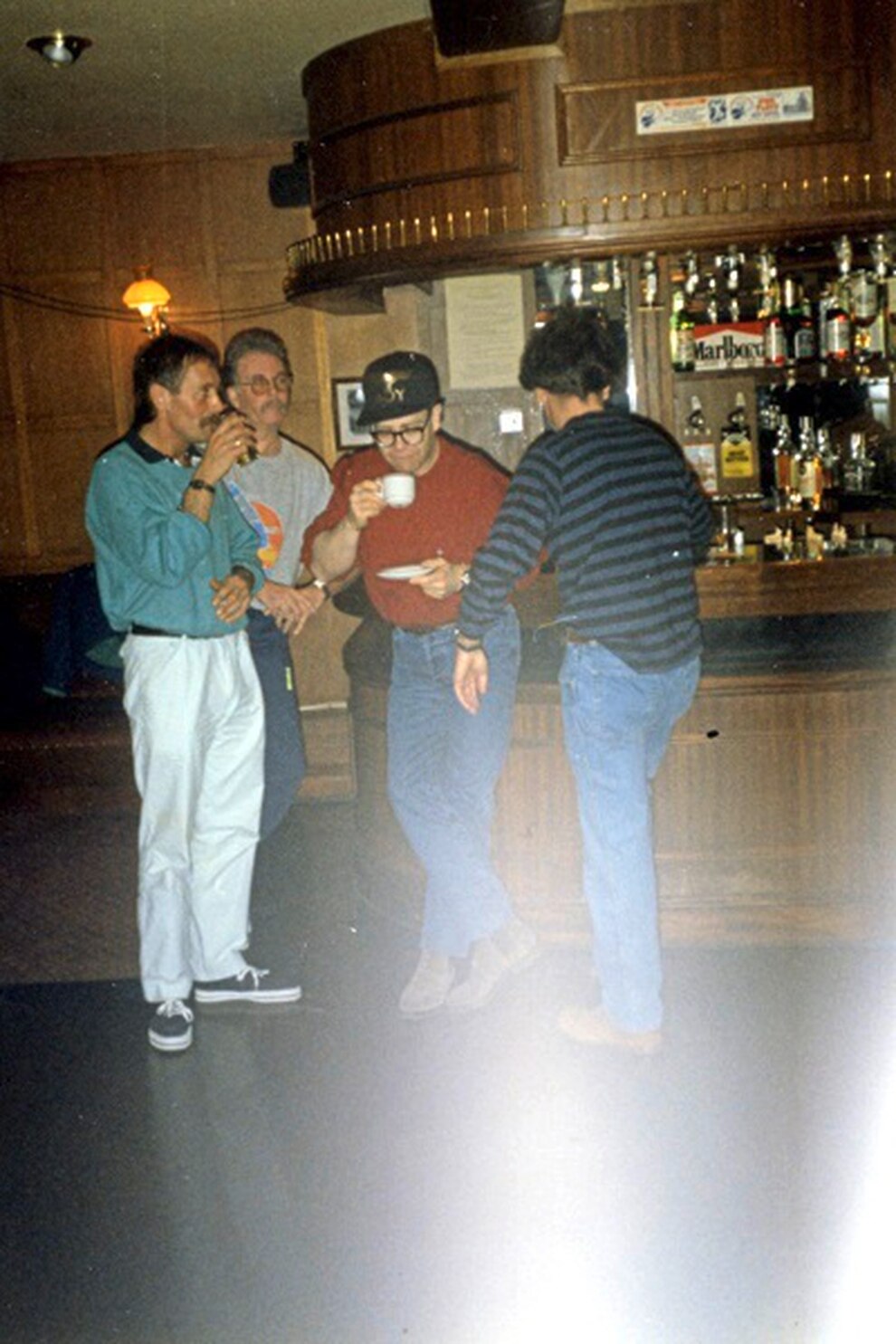 Sir Elton enjoying one of many cups of tea with Charlie Gardner, Jim Docherty and Beechy Colclough. 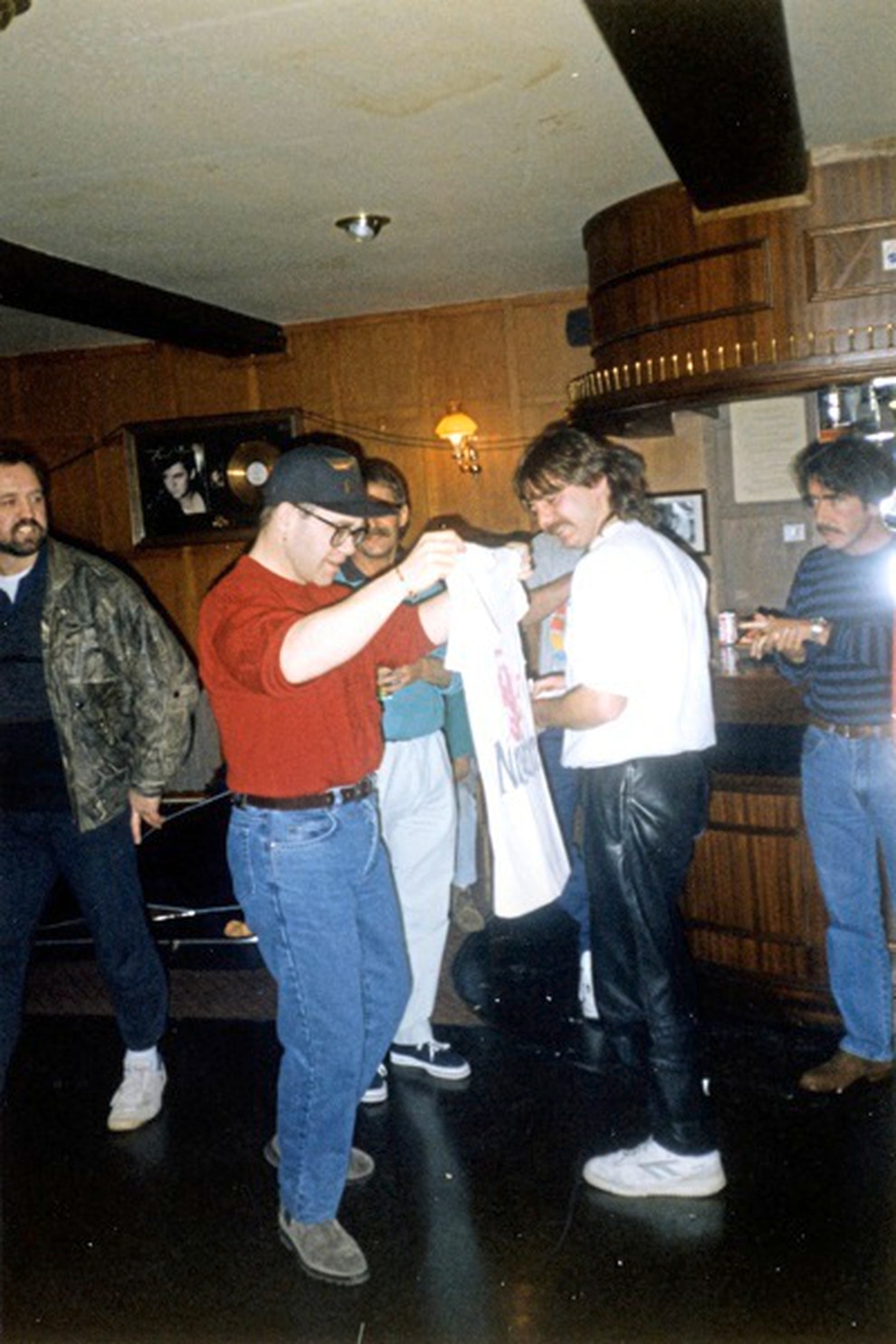 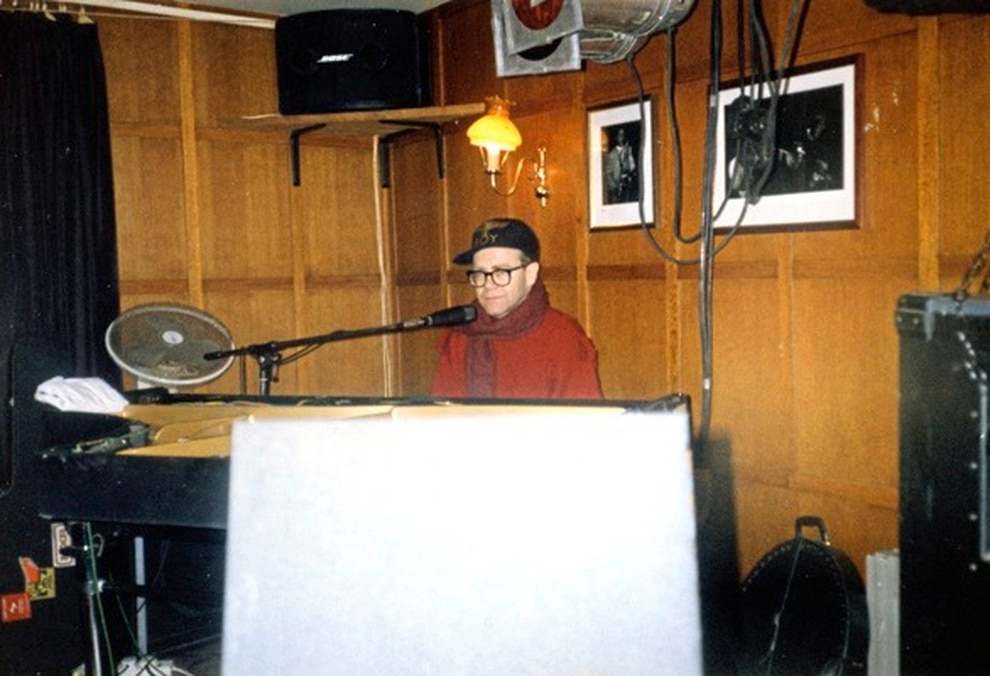 Terry Ife came across pictures of Sir Elton John while going through the personal effects of his sister, Jacqueline Greengrass, when she died several years ago.

Mr Ife said he had no idea his sister had the photos and was surprised she had not told him about them: ‘They grabbed my attention because I’m quite an Elton John fan,’ he said.

He thought it unlikely that Mrs Greengrass had taken them, he said, and none of his family knew anything about them.

He made contact with an Elton John fan who ran a website about the singer, who told Mr Ife that the photos were very rare but could not say more about them.

It was only while chatting to a work colleague some time later that Mr Ife found out more.

It turned out that the colleague was a musician who had played in Guernsey and recognised the Fermain Tavern from the pictures. Elton had played there in 1990.

Neither Mr Ife nor his sister had any connection to the island, so Mr Ife is not convinced that she was the one who took the photos.

That begs the question of who did, and how they came to end up in Mrs Greengrass’s belongings.

One man who has been able to shed a little light on the mystery is Guernsey guitar teacher and sound engineer Mark Guillou, who was on the sound desk for Elton’s appearance.

He said the visit was set up after the singer met local musician Beechy Colclough in the UK.

Mr Guillou said the story he heard was that Elton asked Mr Colclough what he was doing the following weekend and was told that he intended to travel to Guernsey to play a gig with his band, Skint.

‘Would you like a keyboard player?’ Elton is said to have asked.

The gig was the worst-kept secret in the island, said Mr Guillou, and he estimated there must have been about 500 people crammed into the Fermain Tavern on the night, with many more milling about outside.

Band member Charlie Gardner had helped organise the visit, and he was given permission to shoot some video of the rehearsal and the event, and an extract from the two hours or so of footage can be found on YouTube.

As for the photos, Mr Guillou thought they might have been taken by former Radio Guernsey presenter Sam Spindlow, whom he believed Elton was staying with. But he could not think how they might have ended up in Mrs Greengrass’ possession.

To honour the event, Mr Guillou presented Elton with a T-shirt from his own band, Noeyedeer, although he said the star seemed a bit nonplussed about the gift.

‘I’ve never seen him wearing it,’ he said.

‘If he’s not going to wear it, I wouldn’t mind having it back!’