SHEER heart, guts and willpower drove ultra-marathon runner Rebecca Gallienne on to run 156 miles in 24 hours straight for charity over the weekend. 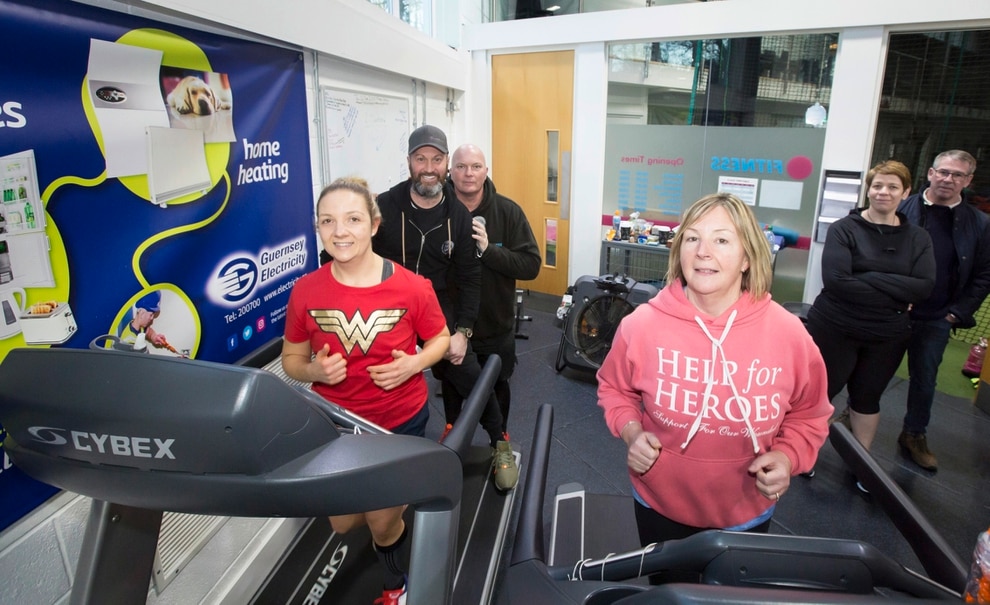 Rebecca Gallienne, left, nearing the end of her 24-hour charity run to raise money for Guernsey Mind’s Man Club. She was joined by her mum, Sian Ogier, for the last 30 minutes. Behind are Paul Gosling, left, of Equilibrium Massage Therapy, who supported the event, and gym instructor Rick Sermon. (Picture by Adrian Miller, 26927562)

Wearing a Wonder Woman top, Miss Gallienne, who began the feat at 8am on Saturday finished her run on the treadmill, interspersed with breaks of 50 burpees each hour, in front of around 50 people willing her on in aid of mental health charity Guernsey Mind’s Man Club.

‘When everyone started coming in towards the end I was getting a bit emotional.

‘It was difficult between around 2am and 4am, as well as the last 20 minutes because I had a bad shin, but to see everyone visit and see how I was doing, spurred me on.’

Miss Gallienne’s run at the MyFitness gym at the Hougue du Pommier was in part to honour the gym members she said had seen lost to suicide.

‘Everyone goes through hard times,’ she said.

‘If I have a bad day, I go to the gym – I thought it would be a good idea to raise awareness of what people could do or are going through, so I spoke to Man Club and they were on board with me doing this and everyone’s been down here to support me.’

She has currently raised nearly £2,000 on her JustGiving page and £2,500 in total for Man Club, a space where men can come together to just talk or listen.

‘It’s sheer, heart, guts and willpower that has got her through,’ he said.

‘She’s raised so much awareness for Man Club and the response we’ve received off the back of her doing this has been incredible, we’re extremely grateful beyond words.’

Miss Gallienne added she is now considering what to do next.

‘I’m really grateful to everyone for coming out to support me,’ she said.

‘I’ve received lots of nice messages and people have said that I’m an inspiration and how much I’ve made a difference, which is really nice to hear.

‘Definitely I’ll do something again and maybe for 48 hours but it probably wouldn’t be this.

‘I’d never tried running for so long before and probably wouldn’t again, but something else for sure.

‘Right now I’m going to go home and sleep, I won’t be able to make it to the bathing pools.’

Miss Gallienne had indicated that she would end her personal challenge with a sea swim.