Chants of 'pause and review' echoed around the Royal Court steps this morning as more than 100 people protested Education’s two-school model. 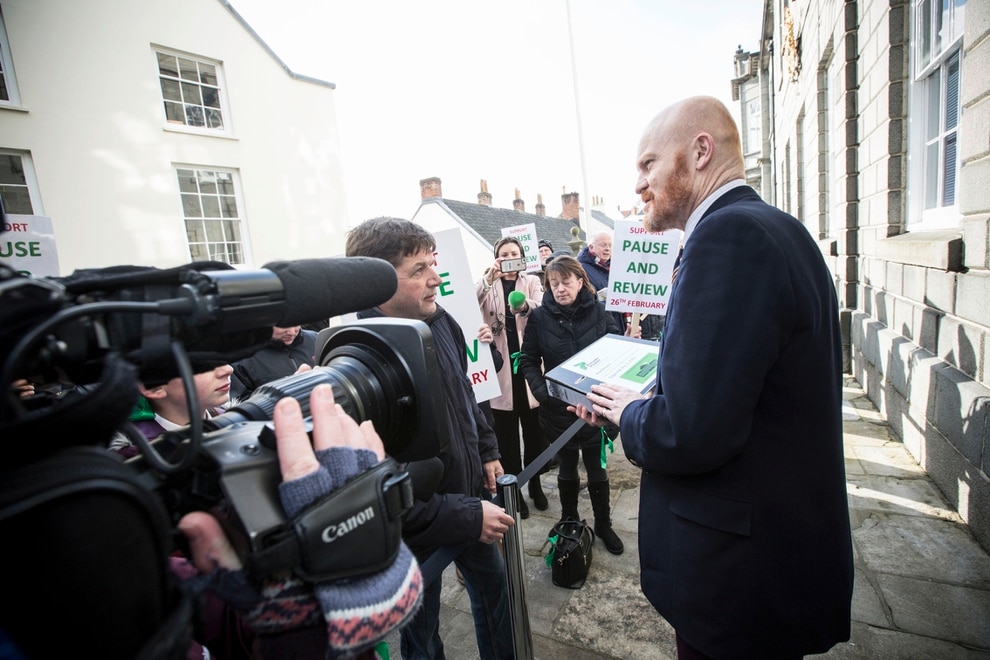 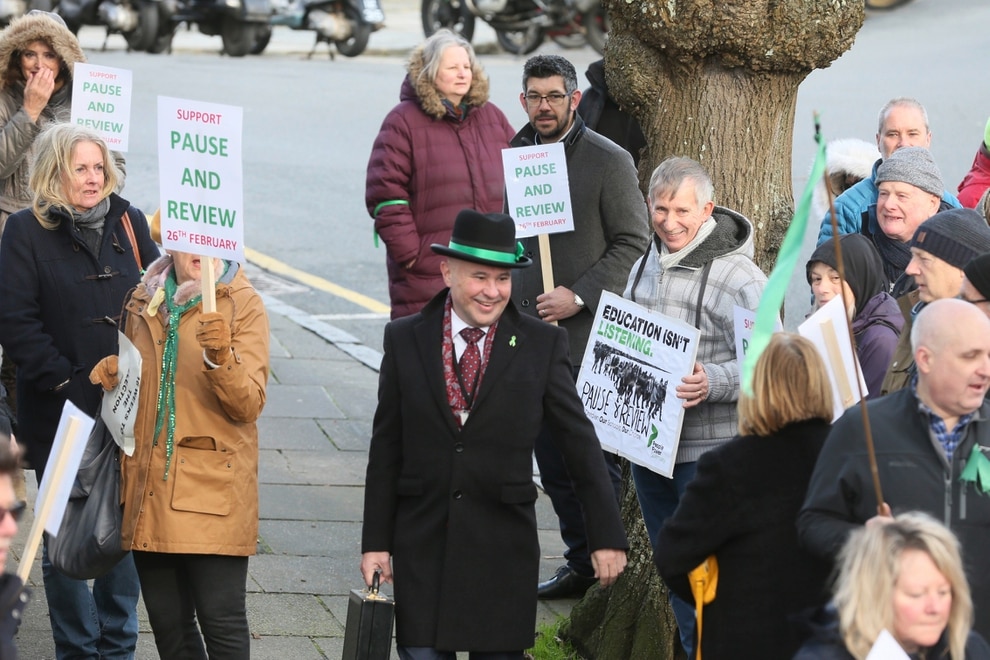 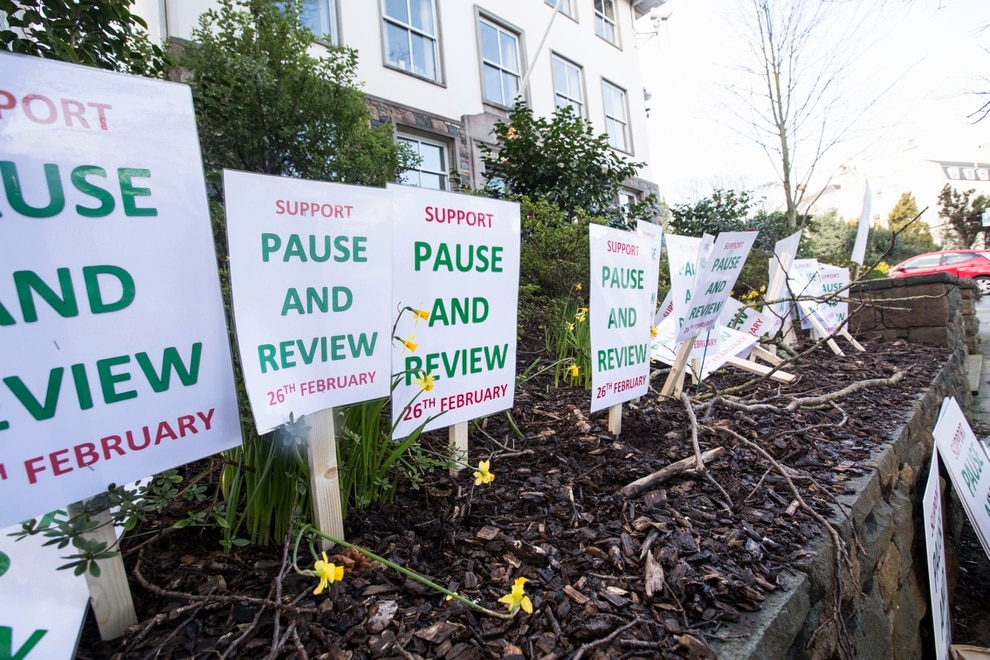 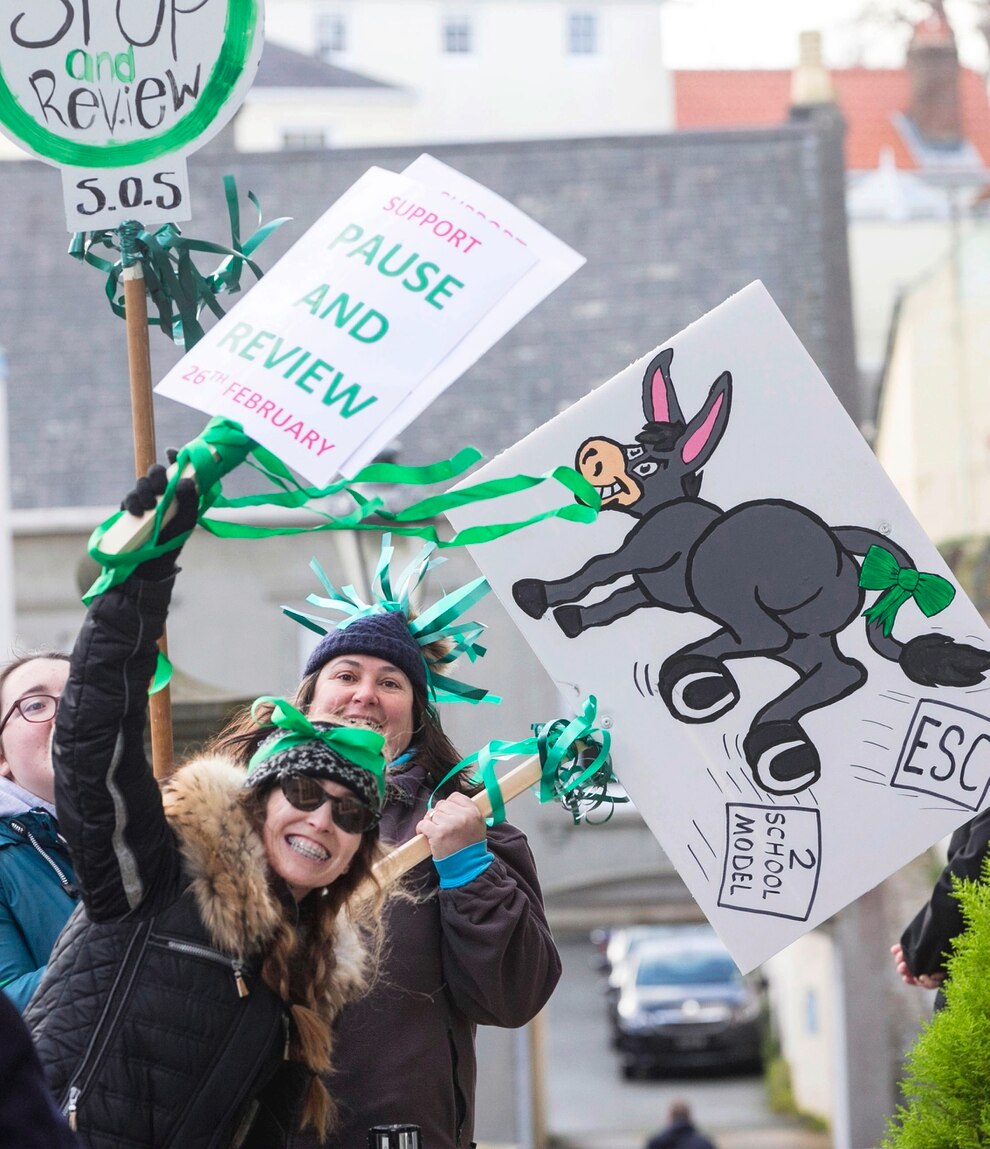 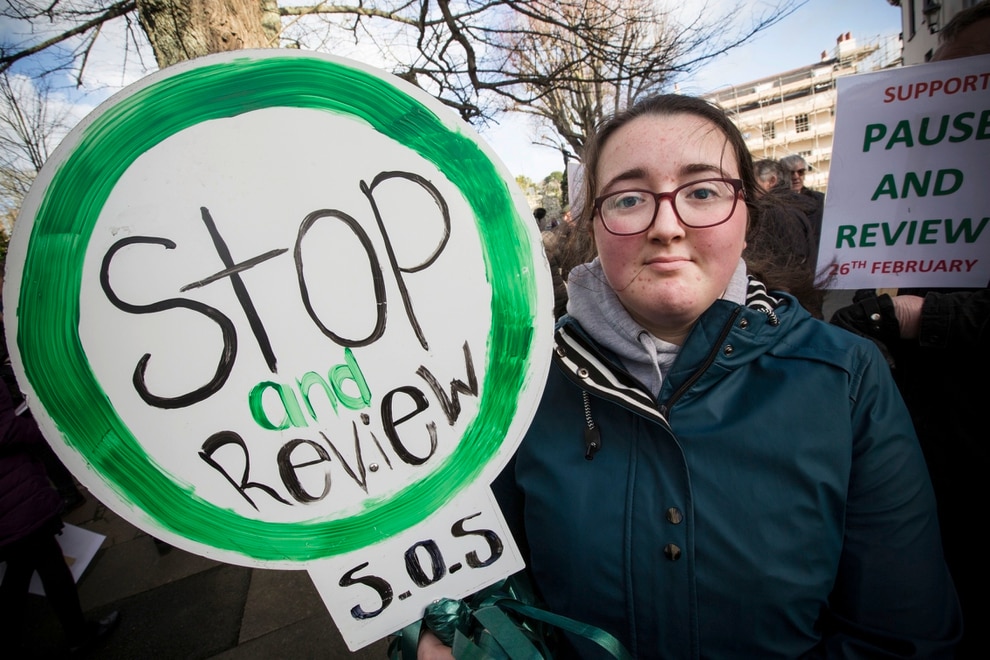 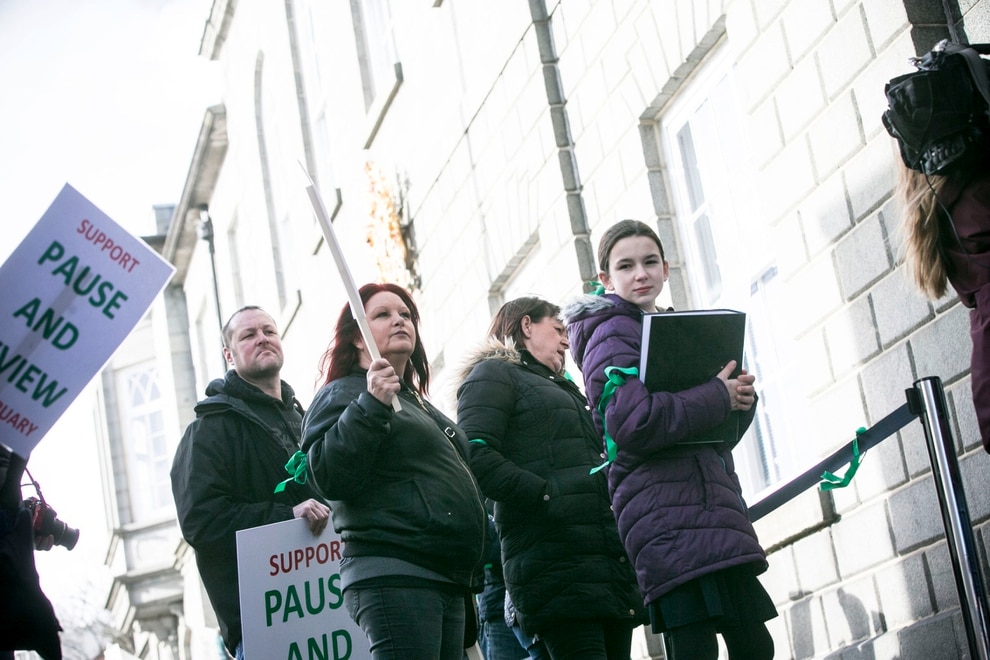 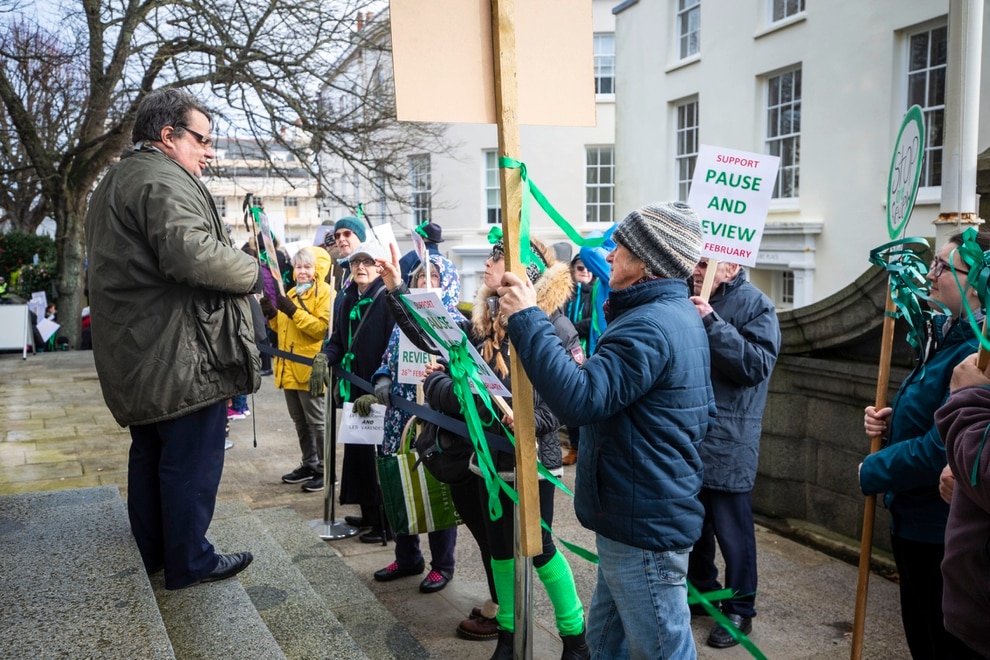 Picture by Sophie Rabey. 26-02-20. People of Guernsey have gathered in protest this morning outside the States building. A final appeal to deputies to 'Pause and Review' the Secondary School Education plans as requete day is here. John Gollop.. (27288367) 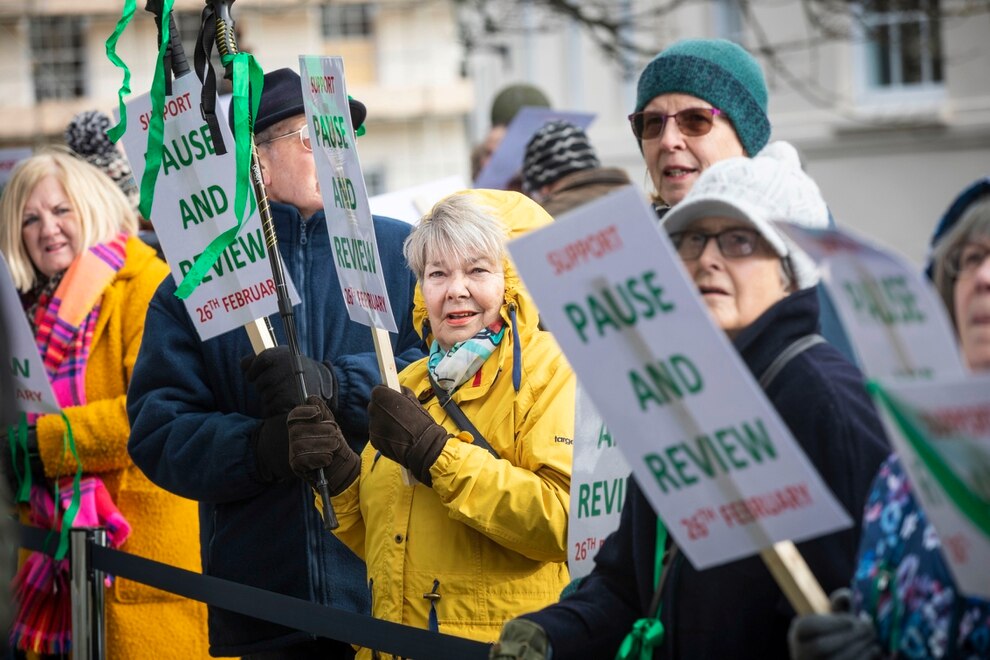 Picture by Sophie Rabey. 26-02-20. People of Guernsey have gathered in protest this morning outside the States building. A final appeal to deputies to 'Pause and Review' the Secondary School Education plans as requete day is here.. (27288329) 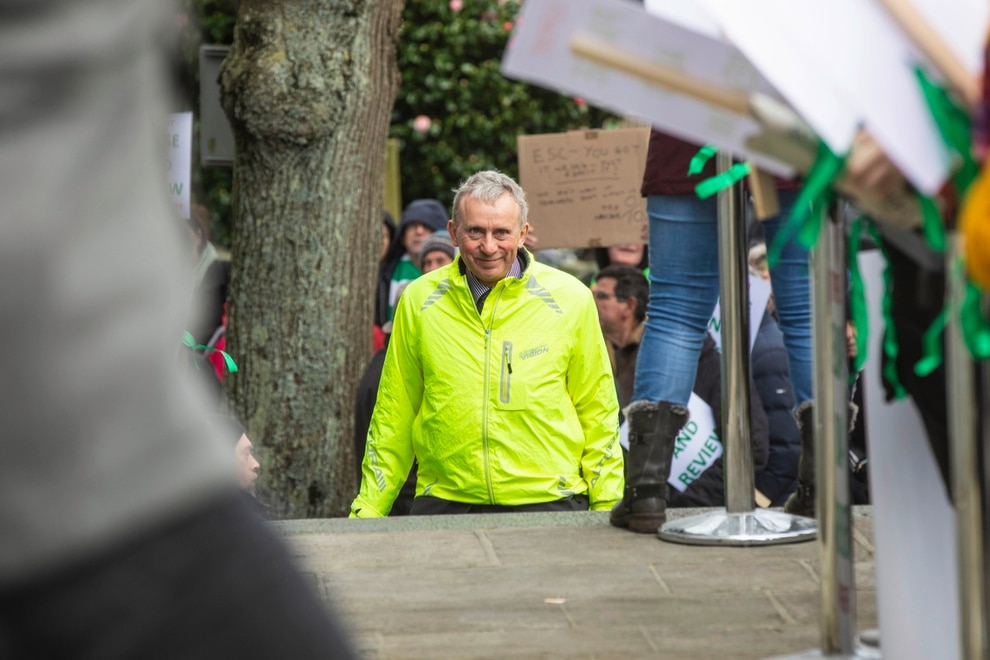 Picture by Sophie Rabey. 26-02-20. People of Guernsey have gathered in protest this morning outside the States building. A final appeal to deputies to 'Pause and Review' the Secondary School Education plans as requete day is here. Mark Dorey.. (27288331)

The crowd gathered at 9am to urge deputies to pause plans and evaluate other options before today's States meeting.

There was a pervading atmosphere of cautious optimism and solidarity as the crowd gathered, but this slowly built to frustration as it became apparent that President of the Education, Sport & Culture committee Matt Fallaize would not face protestors.

Karl Dodd, 38, had used a megaphone to lead chants of ‘pause and review’ throughout the morning and was disappointed that Deputy Fallaize was not present.

‘It sums up his entire campaign really.’

‘His role is to act on the will of the people and all he has shown the people is contempt by not showing up today.’

The event organisers, People Power Guernsey, had hoped Deputy Fallaize would attend to accept a petition signed by more than 5,700 people.

Deputy Fallaize clarified that he was happy to receive the petition but had never intended to attend the morning’s proceedings due to a personal engagement.

‘On Tuesday I received an email from the group which I believe has organised an online petition in support of Deputy Dudley Owen’s Requete.

‘I advised I could not accept the petition on Wednesday morning and offered a range of other times and days, including after the States meeting or during the lunch adjournment on Wednesday or on Thursday or Friday mornings.

'Of course I’m happy to accept a copy of the petition and would do so respecting the views of the people who have signed it.

‘A personal appointment which I could not avoid kept me away from the States of Election this morning.’

‘I will be present in the Assembly from Wednesday afternoon for the States of Deliberation meeting and of course will be there for as long as we sit, which may be some days.’

People Power Guernsey said that Deputy Fallaize had promised to meet with them.

Deputy Andrea Dudley-Owen, who authored the ‘pause and review’ requete was heralded a hero by the assembled crowd and climbed the court steps to cries of ‘well done Milly.’

Deputy Carl Meerveld sported a green ribbon tied around his signature fedora and cheerily greeted the crowd as he arrived.

While the mood was genuinely upbeat, some deputies were met with a cooler reception.

A protester yelled at Deputy Jennifer Merrett* as she approached the court steps.

‘I shook my head as someone had shouted close to my ear.

‘I don’t believe they were shouting at me but nevertheless, the terminology was unpleasant.’

She then stopped when a protester challenged her reaction.

‘Another member of the crowd saw me shake my head and said I shouldn’t, to which I replied (as is captured on the ITV footage) that I was shaking my head because someone yelled near me.

‘I approached the crowd greeting them with good morning with an intent to engage with them. However, as they were chanting, there was limited opportunity for conservation or engagement.’

*This article has been amended because Deputy Merrett was misidentified as Deputy Tooley in the initial report. The Guernsey Press apologises for the error.

The original story also said that Deputy Merrett warned a protester not to shout at her. The article has been amended to reflect the full context.