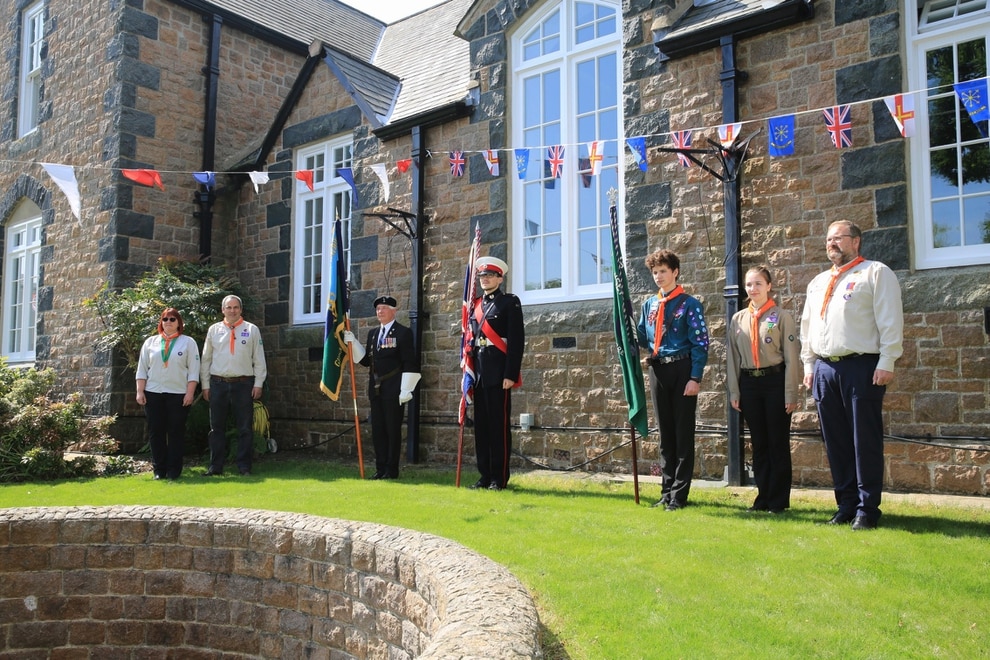 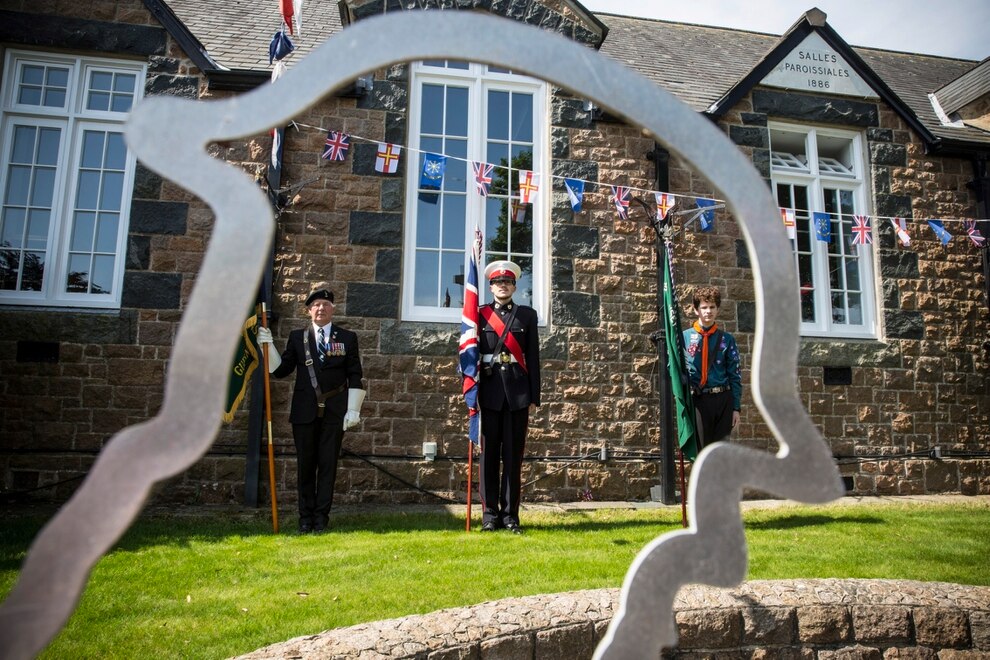 St Martin’s handyman John Garnham, left, would normally be a standard bearer at the main Liberation Day service. But with that cancelled he organised a low-key event at the parish war memorial attended by Peter Morley, centre of the Guernsey Sea Cadets, and Harry Snell, of the 3rd Scouts. (Picture by Adrian Miller, 28249603) 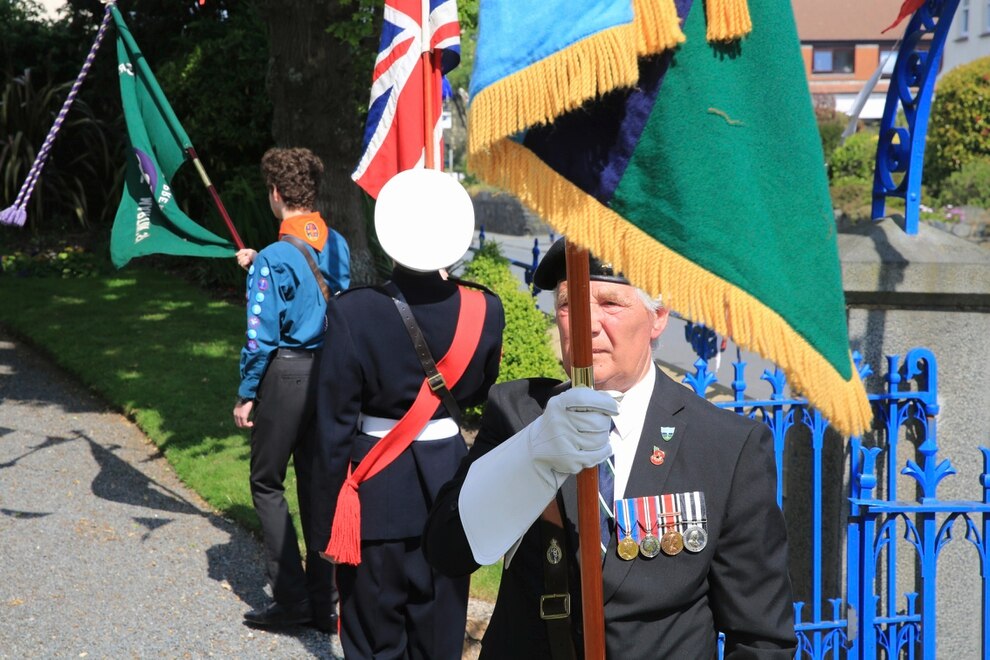 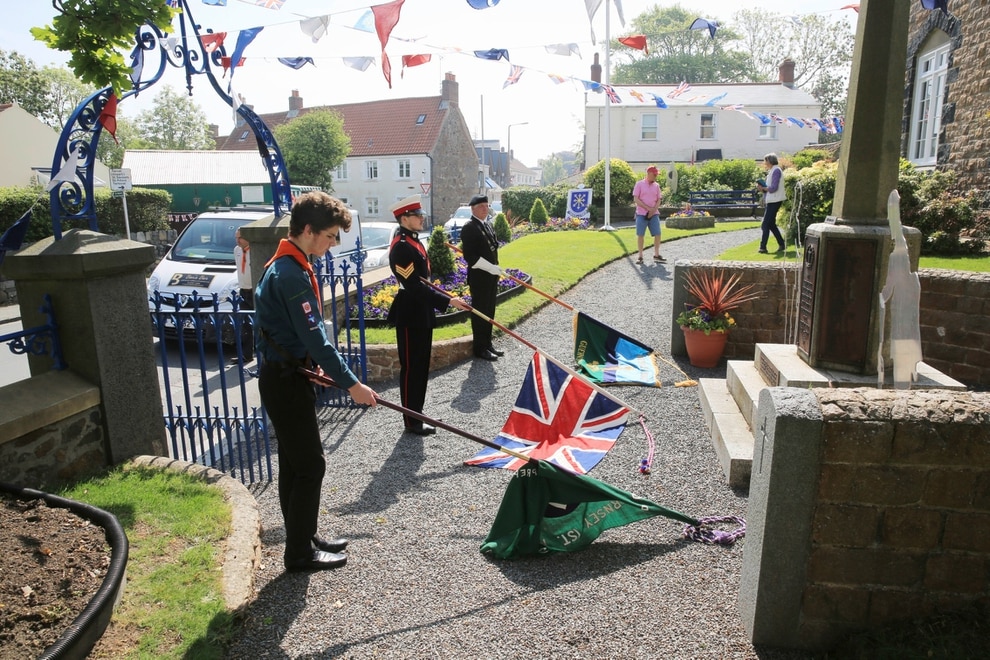 Parish handyman John Garnham is usually one of the standard bearers at the church service in Town on Liberation Day.

This year, with the service shown online as places of worship are still closed due to the coronavirus pandemic, each standard bearer was asked to take a photo of themselves in uniform bearing the flag in their gardens to make a montage for the Royal British Legion.

Mr Garnham wanted to take his photo up a notch and host a little flag ceremony at the memorial.

‘There was only going to be two of us, but some of the Scouts from St Martin’s and the Forest joined and a couple of people driving and walking by saw what was going on and stopped to watch, too,’ he said.

‘It’s a real disappointment that the usual Liberation Day traditions cannot go ahead in the same way, but we’re all in the same boat.

‘We have to be so careful not to spread infection in the community so we made sure to keep our distance from one another, but it was really special to hold the little ceremony at the war memorial.’

In total, three standards were raised, beginning at 11am to time in with the start of the online broadcast of the church service outside the Town Church.

Mr Garnham said: ‘The parish was going to have a party in the field next to the community centre but all that was cancelled, so this ceremony was a nice way for the parish to mark 75 years of freedom from occupation.

‘The senior constable, Jeff Wilkes-Green, was delighted that I took the initiative to put this together.’

He thanked all those who had stopped to watch and hoped everyone enjoyed Liberation Day.