A BEARDED vulture has been recorded flying over the Channel Islands for the first time. 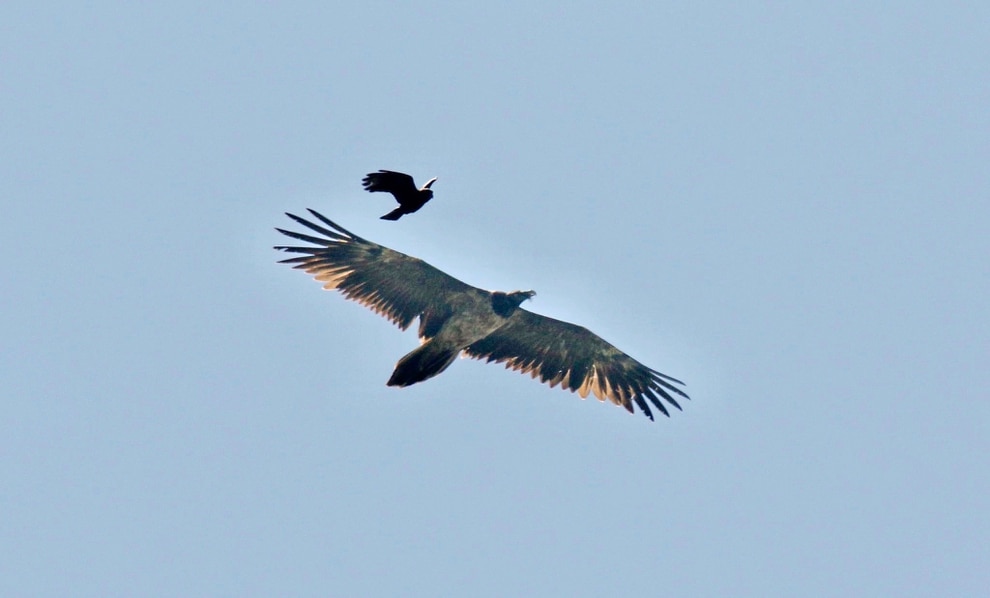 The bird, which is known as a Lammergeier and has a 10ft wingspan, was first spotted in Alderney on 20 May by Neil Harvey, one of the Alderney Bird Observatory board members.

He was out for a walk with his wife on the island’s south cliffs and the sighting is big news for a bird that has never visited the Channel Islands before.

‘Neil is not an experienced bird watcher, but he recognised that this was obviously something out of the ordinary and took a couple of photos using his mobile phone,’ he said.

‘Coincidentally, as I studied Neil’s photos, my eyes widening by the second, I had a call from a local birder who said he didn’t have his binoculars with him but had had very brief views of a huge “eagle-sized” bird of prey at some distance.

‘I responded, more in hope than expectation, that it could possibly be the Lammergeier recently seen on the French Normandy coast, but here in Alderney we have also recorded this spring our first white-tailed sea eagle since 1899, so it could easily be either species.

‘I circulated Neil’s photo and the response we had from social media from very capable birders, looking at Neil’s photo, confirmed that the bird was in fact a juvenile Lammergeier – a first for the Channel Islands and only the second record in the British Isles ever.’

He added it was only a day later he received an excited phone call from the ABO assistant warden, who thought it had been spotted again.

‘Dropping everything I ran out into my garden at Mannez lighthouse and could see the magnificent creature drifting in my direction,’ he said.

‘Harried by a crow that it utterly ignored, it continued towards my position and lost some height allowing me some fortunate photographs as it passed overhead, half circling the lighthouse and heading off south-west over the sea towards France.

‘Hopefully it was on its way home to the Spanish or French Pyrenees mountains, or possibly the Alps.’

Describing the bird and his experience, Mr Horton said it had been extraordinary.

‘If you strapped an ironing board to each arm either side, it would still be a foot short,’ he said.

‘It was the sort of experience that all supporters and enthusiasts of the natural world hope for as we put our “bins” and cameras around our necks and step out of the front door, though perhaps not from our own garden.’

He added that they had since been in touch with the Vulture Conservation Foundation, which confirmed this particular bird to have been spotted in France on 12 May and then at several locations as it made its way north across the country before arriving on the Normandy coast near Alderney on 18 May.

‘I was informed by these vulture experts that it is not unusual for immature vultures to travel great distances, perhaps in search of a new territory or other vulture colonies,’ he said.

Jose Tavares, director of the Vulture Conservation Foundation, which is based in Switzerland, said it was a second calendar year bird, born in 2019.

‘These observations of bearded vultures in unusual places are a measure of the success of the conservation and reintroduction efforts of this species in the Pyrenees and the Alps,’ he said.

‘With growing populations there, the number of individuals in dispersion is likely to increase.’

The Lammergeier, Gypaetus barbatus, is an uncommon and threatened inhabitant of high and remote mountain ranges that has an almost albatross-like wing shape and span, coupled with a long diamond-shaped tail.

It has black facial markings, black wings and the rest of the head, neck and body are a rich rusty orange because in the wild they rub themselves with naturally found ferric oxides. Those bred in captivity do not and are white.

They are the rarest vultures in Europe – estimated at 162 pairs – occurring only in the Pyrenees, Corsica, Crete, as well as a reintroduced population in the Alps. 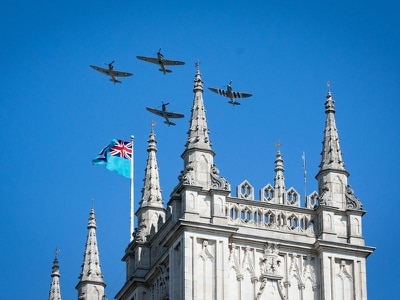