REAPING the rewards of a ‘test, track and trace’ approach launched three months ago, Guernsey residents are now able to enjoy life as most of the islands’ businesses reopened at the weekend, essentially popping many of the islands’ bubbles in one fell swoop.

Businesses have had to adapt to the ongoing changes being made to how they operate from restaurants changing their layouts to the use of single-use menus, throw-away condiment sachets and taking the names and contact details of those that come to dine at their establishment.

Shops set up a queuing system to maintain social distancing guidelines, providing hand sanitiser on entry and in the instance of shoe shops, even disposable foot socks.

Despite the queues, the continued social distancing and the many more ongoing challenges shoppers and restaurant goers faced in particular, everyone remained positive and happy to be out again in the glorious sunshine over the weekend.

Viv Lee and Ruth Hargreaves queued up outside Creaseys after stopping in Marks & Spencer’s and said it was great to see so many people out.

‘We wanted a bit of normality,’ said Ms Hargreaves.

‘Plus it’s hard to find clothes that fit if you can’t see them first, so we’re having a good time out.

‘We’re going to follow this up with a burger from Chefan – it’ll be the first time in so long and it will be nice not to cook.’

Although some said they were disappointed not to see all the shops open.

‘It would have been nice for the whole of Town to be open,’ said Anne Smith.

‘I thought this was the big day back and it’s a bit like they’ve missed a trick. The bunting looks great though and there’s such a nice atmosphere with everybody knowing what we’ve been through to get here.’

Clothes shops including Land of Green Ginger, Wild Orchid and Marks & Spencer, cafes such as Gusto Espresso and stores including Boots opened their doors for the first time in nearly 10 weeks, while restaurants including The Rockmount and Le Nautique in Town said they were fully booked.

In addition, kiosks and beach side cafe owners said it had been a busy but enjoyable day to be back open and see customers again.

Port Soif Kiosk Surfside manageress Elke Schimek said they were not sure what the day would be like but had seen a steady increase in people finding the confidence to come out again after a number of months in lockdown.

‘We set up this morning to adhere to guidelines but it was quite quiet, now it’s picked up and we’ve seen a lot of families,’ she said.

Owner of Vistas along Vazon Bay, Nick Percy, agreed that it had been a slow day to begin with.

‘There’s so many people out now which it’s good to see,’ he said.

‘It’s not extremely busy, it’s just about right and everyone’s been really friendly and chatty and that’s good considering how things have been.’

Police had stepped up patrols around the island but said other than a few calls for noisy parties everyone had been well behaved.

‘So far everyone has complied with the rules and guidelines,’ said Duty Inspector Kieran McGrath.

‘We’ve had lots of police out on patrols and they report that people have been well behaved.’

There were no arrests made at all over the weekend up until Sunday afternoon. 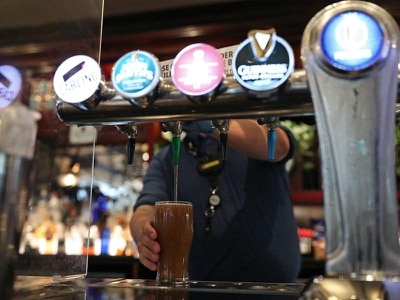