THE arrival of the first passenger ferry since 23 March and the start of the lockdown brought a brief and poignant reunion for one member of the crew of Condor Rapide. A brief reunion with his family for Tim Diment, an engineer on Condor Rapide, the first passenger ferry to arrive since 23 March. There for a socially distanced chat during the brief stop-off were, left to right, Katherine Felbabel, Lily Felbabel, 9, Ava Marley, 3, Jasmine Felbabel, 6, Ellie Felbabel, 13, and Steph Marley. (Pictures by Adrian Miller, 28435672) 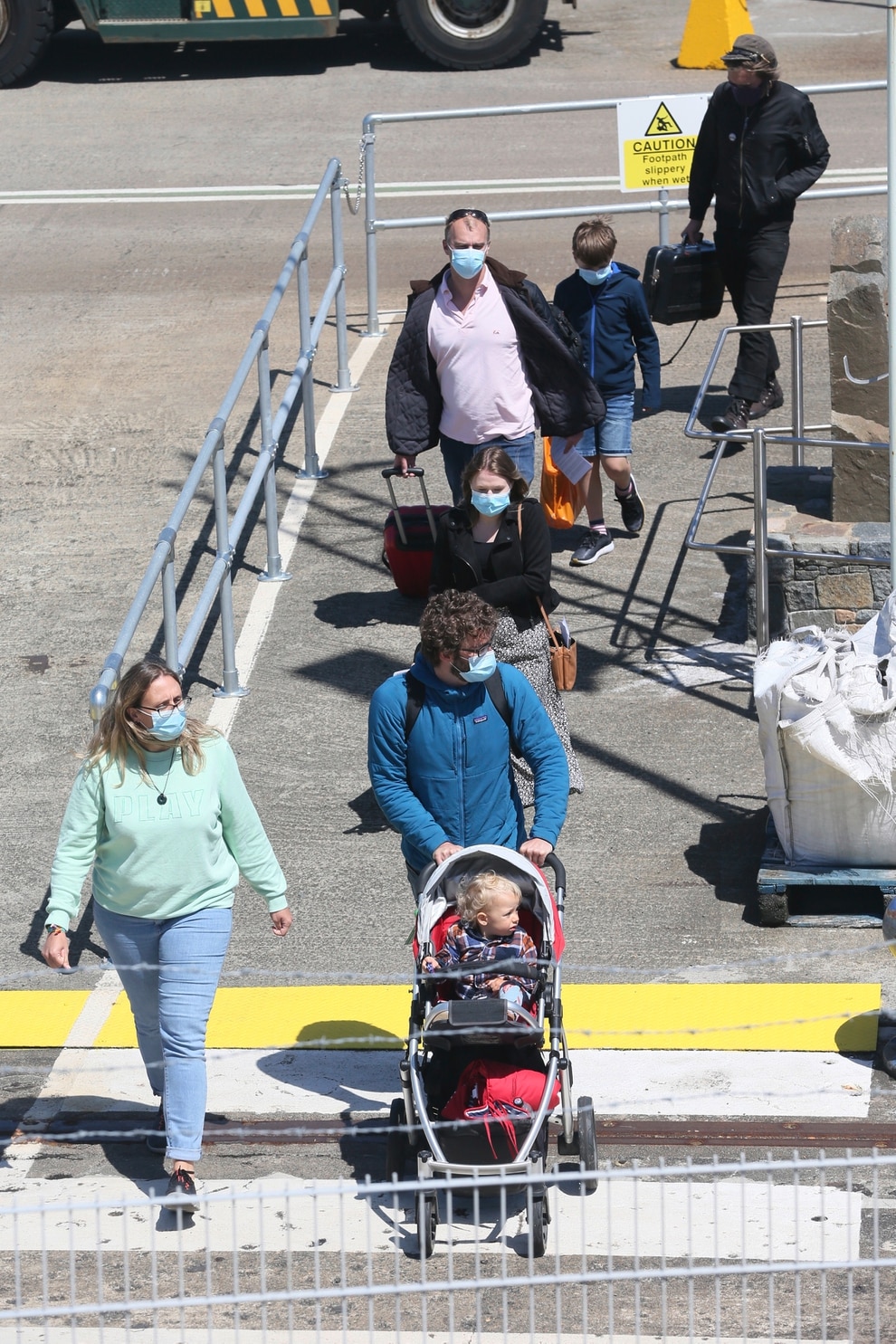 Passengers could opt to take part in a trial of seven days of self-isolation with a second seven-day period of passive surveillance. (28435665)

Engineer Tim Diment has worked for Condor for about 30 years. He lived in Guernsey before moving to St Malo where he has been based for the last 10 years.

Though he got off the boat, the closest he got to seeing his family was a brief socially distanced chat through the security fence.

Legal secretary Steph Marley, 38, and her sister, trust administration assistant Katherine Felbabel, 34, were there to see their father.

‘We haven’t seen him since February, as he was on leave in early March and sailings stopped that month,’ said Mrs Felbabel.

‘It’s just nice to see him in the flesh rather than looking at him on a screen and at least we know he’s all right.’

Trust administrator, Harry Gallienne, 22, drove to the ferry to meet his girlfriend, Jessica Moore, 22, who works in HR.

Mr Gallienne said he delivered the car so she could drive to her point of self-isolation while he would be getting a lift home. The closest he got to her was with a socially distanced wave.

‘I think the [7-day quarantine] trial scheme is a good idea,’ he said. ‘She does too as she wasn’t looking forward to 14 days without freedom.

‘It was a strange experience as you’re quite close to someone, yet you can’t touch or even go near them.’

A total of 83 passengers and 37 cars arrived from Poole, while 53 people and 35 vehicles were going in the opposite direction.

In a trial scheme, which is running this week, those arriving by Condor and Aurigny may be able to self-isolate for only seven days, rather than 14, if they sign up to certain conditions.

During days one to seven they must self-isolate completely and not leave their accommodation or the island.

Providing they receive a negative Covid-19 test, during days eight to 14 they will be given more freedom, but will still be under passive surveillance. This means that they must not leave the island until after day 14 of arriving.

During the 8-14 day period, they must restrict their contact with other people, such as not going to restaurants or other popular places.

The incubation period for coronavirus is understood between two and 14 days, but 80% of cases would be identified after seven days.

In announcing the trial, director of Public health Dr Nicola Brink said that given the island’s testing and track and trace capabilities, it was considered to be a very low risk approach.

Disembarking passengers had to bypass the arrivals/departures hall yesterday to waiting vehicles.

. For details of passive surveillance and to see the law in full, go to https://covid19.gov.gg/guidance/travel