Air bridge passenger warms to the Isle of Man

ONE of the Guernsey people to visit the Isle of Man on the first air bridge flight gave a rather downbeat first impression of the place to a local journalist, but after spending time there he said it was a trip he would remember for all the right reasons. John Knight, right, told local ITV reporter Joshua Stokes on arrival in the Isle of Man he was there because there was nowhere else to go, but by the time he left he was singing the island’s praises. 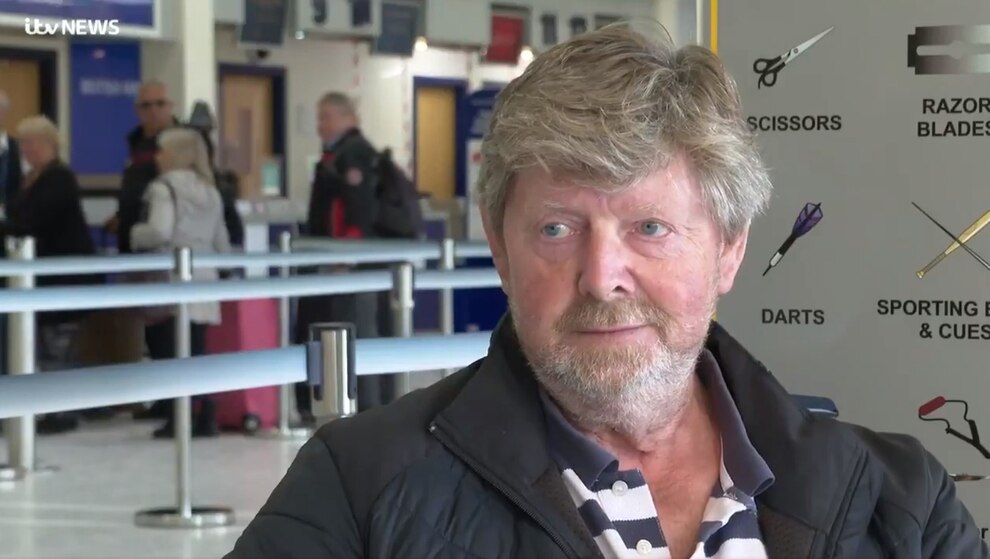 John Knight said there was a lot more to the Isle of Man than he realised.

In a brief interview on arrival at the Isle of Man Airport, John Knight’s instant reaction was seen by some 28,000 Twitter users after his deadpan, but hilarious, interaction with Manx reporter Joshua Stokes.

After using the air bridge to the other Covid-19 free jurisdiction, Mr Knight was approached by ITV and told the reporter the flight was late, he was only there because there was nowhere else to go and when he was asked what he expected the Isle of Man had to offer, he said: ‘February by the looks of it.’

All in good humour, Twitter users commented on the video that they should buy the Guernsey gentleman a beer, although no one actually did.

Catching up with Mr Stokes at the end of his holiday, Mr Knight said after seeing the clip of his ‘Eeyore-ish’ answers on Twitter, his wife told him he was not allowed to talk to strangers any more.

This time, when he was asked about his holiday, he seemed much more positive and approving of the Isle of Man.

‘We’ve got some favourite places, I think we really enjoyed Peel [a seaside town], we have been perplexed by your promenade and the rather strange diversions that we’ve managed to work our way through,’ he said.

‘All the people we’ve met have been smashing and they’ve all been helpful and polite.’

A few people on his trip had said to him that they heard him on the radio and congratulated him on his great joke.

‘Quite a few people on the Twitter feed said “We should buy this guy a beer”, but you know what, nobody did.

‘So next time we come I’ll let you know and at least you could buy me a beer,’ he said to the reporter, who seemed keen to do so.

Talking about the air bridge, he called it a ‘success all round’ and said it was great for both Guernsey and the Isle of Man who had managed to get on top of the Covid-19 pandemic that they could share their islands with one another.

When asked if he got everything he expected out of his holiday, Mr Knight said: ‘I certainly got more than I bargained for, I wasn’t sure what to expect but what I have got out of it has been great.

‘There’s a lot more to the Isle of Man than we had realised.

‘It’s a holiday we won’t forget – for all the right reasons.’