A NEW mural of Second World War icon Rosie the riveter, with a Guernsey Together twist, has been coming together in Market Street. Tom Rowe and Nina Thomson in the early stages of the mural. (Picture by Juliet Pouteaux, 28535450) 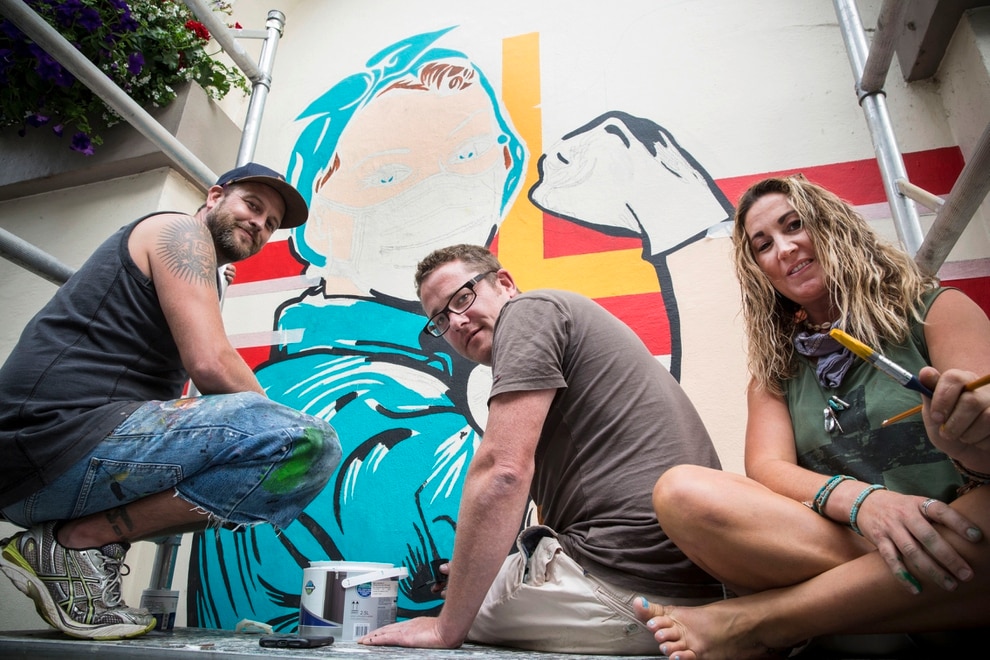 Left to right, Tom Rowe, Ned Meinke and Nina Thomson made grood progress on the mural yesterday, but more work is needed to finish it. (Picture by Adrian Miller, 28535578)

Soroptimist International Guernsey has organised for the painting to go up in one of the arches of the Markets, which forms the outside wall of New Look.

A sub-committee of the group, made up of Cherry McMillen, Sue Robilliard and Heather Gibbs, organised for the work to take place.

Ms McMillen said she had seen the design on social media – which has the iconic character donning a facemask – and felt it encompassed the strength of the Guernsey together spirit during lockdown.

‘Hopefully it will be here for a long time,’ she said.

Tom Rowe created the design and was working with Ned Meinke and Nine Thomson to put it up yesterday. A projector was used to help them draw the outline on the 2.5m by 3.5m space. They then filled it in using masonry paint.

Mr Rowe said there was more to do today, but he was pleased with how it was coming together.

‘It’s like a gift to Guernsey, showing that we got through this and shows the strength of the island,’ he said.

The arch is one of the several in the wall, which run along Market Street, which was refurbished last year. It is hoped that other bodies might be interested in sponsoring art in the other arches in future.

Soroptimist president Sally Evans said they were very grateful for the support of Bailiwick Estates, which owns the building, and said they could not have been more helpful.

Cardiff on the verge of tougher restrictions, council leader warns