THINGS are changing for the island’s sewage collection tankers, and not just the disappearance of its distinctive yellow bodywork. 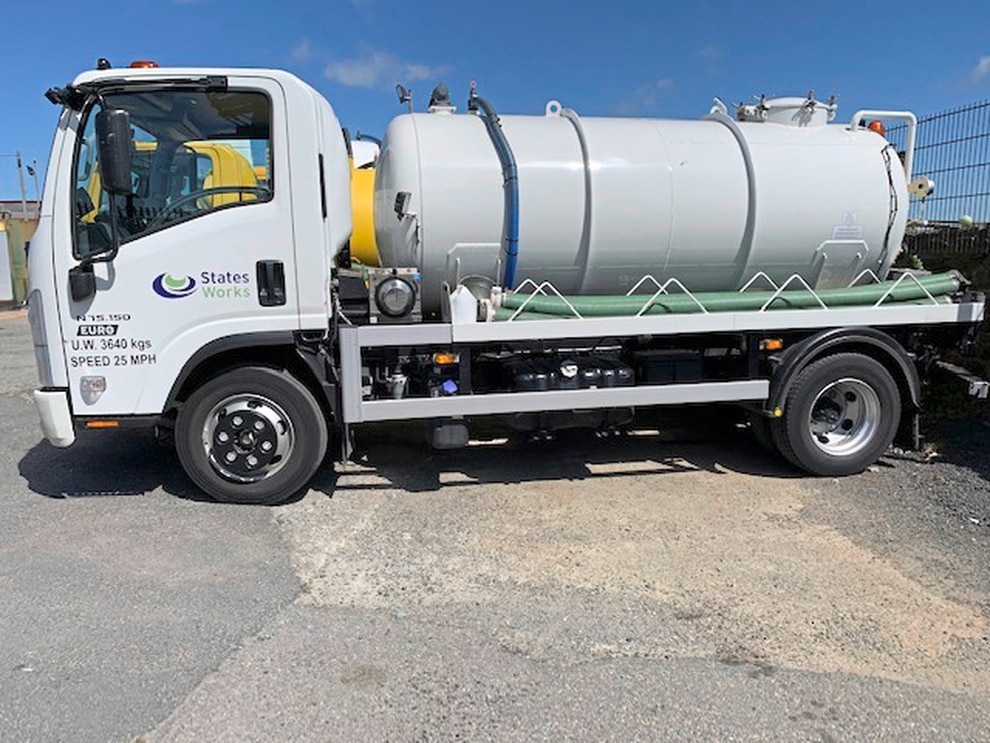 States Works is trialling a new smaller sewage tanker and, like all new vehicles in its fleet, is in its delivery colour of white, so eventually the yellow tankers. (Picture by Juliet Pouteaux, 28564432) The yellow sewage trucks will be phased out. (Picture by Peter Frankland, 28566225)

A new lightweight vehicle is being trialled to serve properties in the lanes.

It comes with an aluminium tank rather than the standard stainless steel, but has performed well so far and could become standard as the fleet is replaced.

The trial vehicle is one of 11 new tankers, which States Works has taken delivery of in recent months to replace some of its older yellow vehicles.

The new all-white vehicles use the most up-to-date Euro 6 diesel technology, which provides a cleaner operation and better fuel economy.

The remaining yellow tankers will be replaced as they come to the end of their working lives. It will take about eight years to complete the transition.

Matthew Hardwick, senior manager (technical) at States Works, said: ‘Previously, all our vehicles come as standard white, which were then sprayed yellow and branded with our States Works logo.

‘To avoid this cost it was agreed that over time we would maintain white-branded vehicles throughout the fleet. These new sewage tankers are one of several within our fleet that are now white.

‘The standard white also improves the re-sale value achievable when the vehicles have finished their life with States Works.’

He added that there was a rolling replacement programme, with older tankers gradually phased out and a switch to cleaner, more efficient vehicles. ‘The ones which we have just replaced were on average around 10 years old.’

The 10 new tankers – a combination of five single and five double load vehicles – were bought at a total cost of £890,000 and the new narrow aluminium tanker cost £71,000.

The new vehicle was performing well so far, added Mr Hardwick, and if the trial was successful it could change the make-up of the tanker fleet.

It is one of the smaller vehicles used to service properties that are difficult for a full-size tanker to reach, typically located in lanes.

The traditional small vehicles are subject to weight restrictions, which means they are often unable to empty a full cesspit in a single visit. However, with the lighter aluminium tank, the new one is able to carry a full load, therefore requiring fewer trips.

‘Tanks are commonly made of stainless steel because sewage can be corrosive,’ said Mr Hardwick.

‘However, the contents of a cesspit is typically diluted by all the other waste water from the property, such as from washing machines, dishwashers, baths, and showers. We may be able to make the aluminium tank more corrosion resistant as well, by applying some form of coating on the inside.

‘However the one we are now trialling has not had any special treatment so far, and to date we have not had any issues.’

He said that if it continued to perform well, then potentially they could adopt an aluminium tank as standard as they replaced the fleet.

‘As well as being able to carry a standard load with the narrow vehicles, it would also make them all lighter, so they would use less fuel.’