In his latest tale of unusual island deaths, Rob Batiste relates the story of the soldier killed by a regimental stag... Changing times: The slopes to Fort George at the Terres were a lot less tree-lined when this Guerin picture was snapped shortly after the creation of the half-moon area for the spreading of vraic. (25179529) 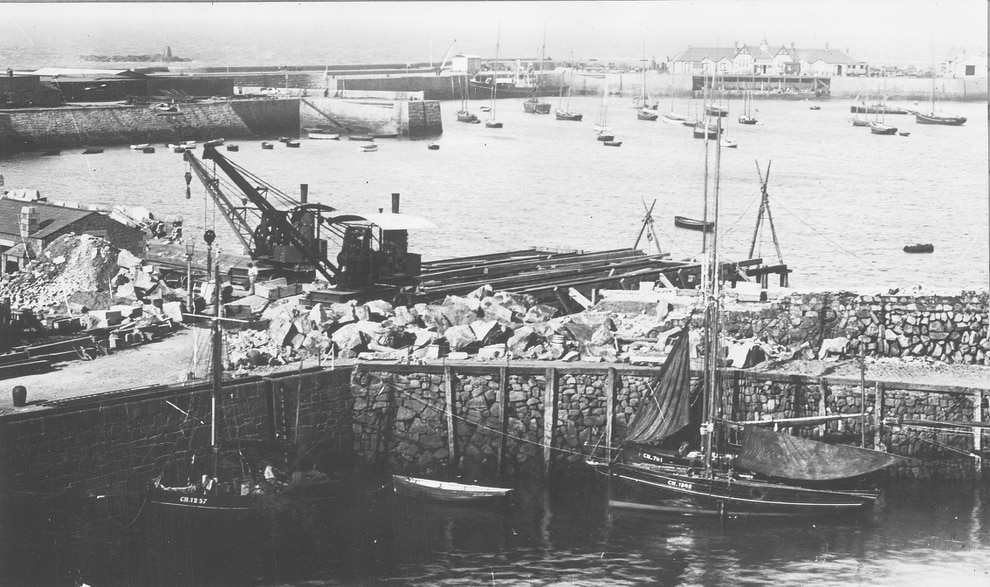 Back-fill for the creation of the new piers came from the Terres cliff slopes a short distance away. (25179569) 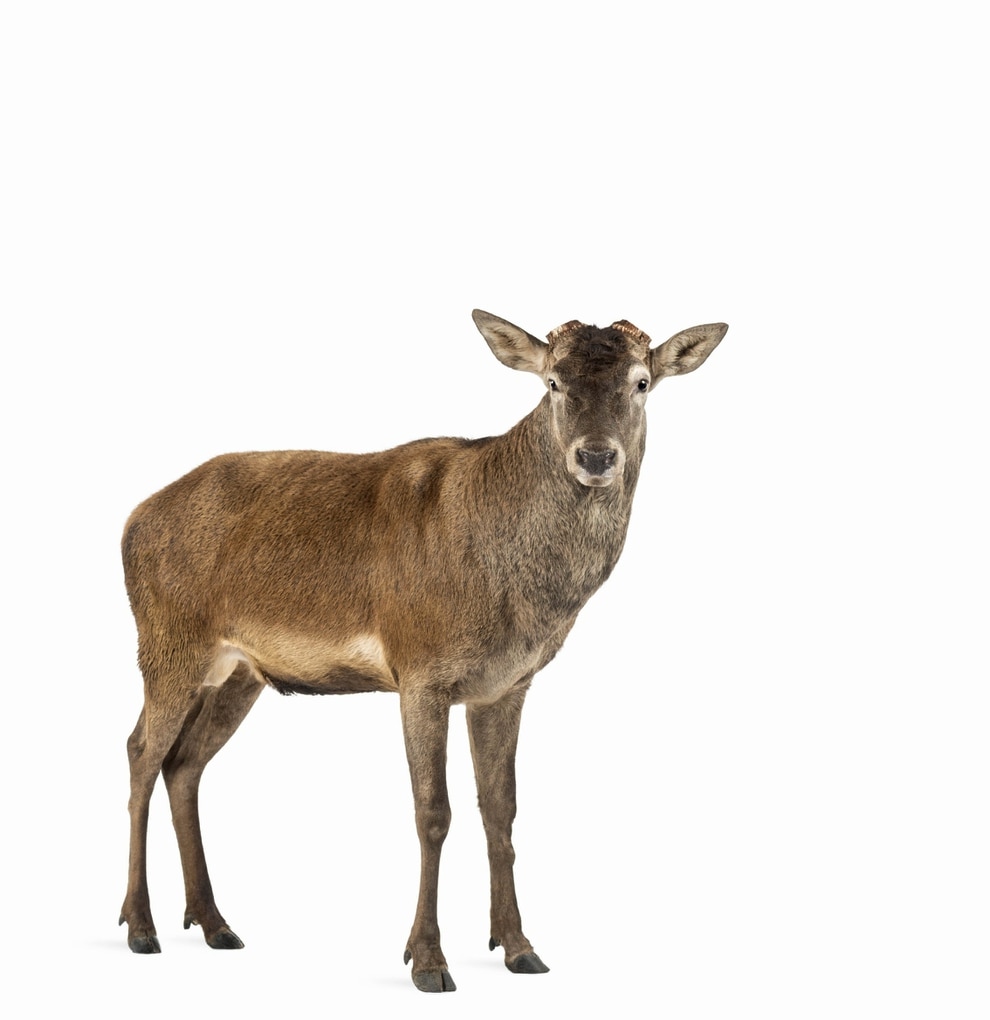 Despite having had his antlers lopped off, the 'somewhat ferocious' stag, given free rein to roam around Fort George, was still highly dangerous.

SOME were perhaps born to be unlucky.

Every indication is that Irishman James Devine, master gunner with the 72nd Duke of Albany’s Own Highlanders Regiment stationed on island, was one such unfortunate and met one of the island’s most unusual deaths at Fort George in late autumn 1851.

Quite honestly, he should have been around the Fort George block enough times to know it was a bit weak to try and fend off a big, grumpy stag with one hand and a paintbrush.

But, on 11 November 1851, that is just what James, married with several young children all living with him and his Scottish born wife Margaret at the Artillery Quarters at Fort George Road, should have known better than to attempt.

It seems that some years earlier James had had his right arm blown off in Antigua.

But it didn’t stop him developing a strong reputation for gunnery while in Guernsey, where he had been for at least a decade.

Irritable stags have scant regard for reputations, though, and this big male red deer, a pet of the 72nd Highland depot, was seemingly given free rein to roam at large in and around the walls of the fort at a time when the southern climbs out of Town were not very accessible to the public and there was no Le Val des Terres.

Devine knew the stag well and was aware of what The Comet newspaper in those pre-Guernsey Evening Press days described as it possessing a ‘somewhat ferocious disposition’.

After all, he had previous for attacking several people.

Blimey ... and they let it roam loose.

Devine, though, had his paintbrush to defend himself with and this day opted to walk through the fort entrenchments in the knowledge that the old stag – no name given, I’m afraid – had had his dangerous antlers lopped off.

Having no bony protrusions didn’t make the stag any more happy and on this particular day the animal made a butt at Devine as he walked through.

We will now go over to The Comet for a full description of the one-sided contest between deer and Devine:

‘A second attack followed; and Mr Devine, to protect himself, placed his back against the wall of the ditch; when the stag bounded up to him, and with his fore legs, dragged Devine from his position, threw him violently to the ground, and continued butting him.

‘The perilous situation of the master gunner having been observed, an alarm was given, and he was rescued from his fierce assailant.’

It does not say how, but presumably the rescuers possessed more than paintbrushes to shoo the old deer away.

‘On being removed to his own quarters, Mr Devine received the professional care of of the surgeon of the 72nd and of Dr de L’Isle, ordinance surgeon, when it was found that two of his ribs on the right side had been fractured and that the whole of his body was shockingly lacerated.

‘He now lies in state, which creates the utmost apprehension among his friends.’

Devine slipped away three days after the attack and was buried in the old Strangers Cemetery, where wife Margaret and his seven children – John, Emily, Walter, James, Henrietta, Elizabeth and Martha – could visit during their remaining time on the island.

There have been other fatalities linked to soldiers and the fort, unsurprising given the hundreds stationed there over 261 years until it closed in the late 1930s, but none was as unlucky as poor Devine – although a chap called Gordon Locke pushes him on that score.

The local met a nasty end, too, being blown up by a grenade.

It was towards the end of the Occupation when Locke was among many islanders pressed to work for the Germans in an ammunition dump in the Citadel at the fort.

He didn’t know Locke’s name at the time, but he never forgot the harrowing outcome of his colleague’s fatal indiscretion.

They were all waiting for lunchtime and a signal from the Germans that they could be escorted out.

‘We were waiting outside our little room and, being nosy, I went into one of the other rooms and there was a young chap [Locke], I didn’t know his name, in there by himself and in his hand he had a Mills bomb and he was playing around with the ring.

‘I said: “Don’t do that, you’ll kill yourself.’’ I took it from him and I put it in one of the boxes of them grenades. You can’t play with these things.

‘I walked out, expecting him to follow me, and the whistle blew for us to go. I wasn’t out the room yet and there was a hell of a bang behind me.’

Robin turned to see the devastation.

‘He [Locke] was behind the boxes and all I could see was where his face had been ... only his eyes, two great big eyes, staring, and his arm, from the elbow down, was gone.’

Roy called for the Germans, who stretchered Locke out. He was never to see his fellow islander again.

Only one Terres tunnel survived

BACK in the days of that grumpy Fort George stag that did for Devine, the slopes and approaches to Havelet looked a whole lot different than today.

Indeed it might still have looked different but for the co-operation of the British Government, which ruled the roost around those parts and wasn’t happy for islanders to get a look in.

In those early Victorian times scarcely a soul would be seen around Havelet, long before the Val des Terres was cut into the hillside and there were long promenades out to Clarence Battery and access to the cliffs above Soldier’s Bay and beyond. But it all changed when Guernsey’s government decided – yes, they could make a big decision back then – to transform St Peter Port harbour and make it fit for purpose.

But there was a problem.

While St Sampson’s harbour had an embarrassing amount of ballast to use in its own reclamation plans, St Peter Port didn’t.

All the ships arriving into the Town Harbour came with cargo and, in fact, had to take on ballast for the short trip up to St Sampson’s, using ballast taken from the then busy Charrotterie quarries.

Town would, though, still need a monstrous amount of back-fill for the inner and outer walls of cemented blocks in the building of the Castle Emplacement, St Julian’s, Victoria and Albert piers, new widened quays and the South Esplanade.

It had to come from somewhere – and the somewhere lay in the cliffs at Les Terres. It was a grand idea, because the supply looked inexhaustible.

So the British Government was approached with the request that it allow the slopes below the fort to be used for this purpose.

The government saw a good deal when it popped up and quickly agreed, with the agreement being that it would get an annual Fort George rental of just £2 – enough to feed the stag – and free passage at all times for all military personnel and the inclusion of all landing places along the coast or roads up to the cliffs below the fort.

When the work began, lines of rail were laid down to use gravity from Havelet way and hundreds of men, with their families, came over from England to carry out the back-breaking work.

The slopes were eaten away to the tune of well over 100,000 cubic yards until they hit a problem. A very stony problem.

It was called the Creux de la Marte Femme, and it blocked the approach to Clarence Battery.

The only way through was to blast their way and tunnel No. 1 was created, and then a second, which today houses the aquarium.

Altogether about 200,000 cubic yards of stone and soil were hacked out of the cliffs, leaving a right royal mess, but the States then had a brainwave.

If the government had allowed the desecration of the cliffs, then no doubt they would agree to their re-embellishment.

And they duly did.

Plans for the establishment of a full English promenade right through into Soldier’s Bay were put in place, including a bridge over the big gully that existed.

Included in this plan was an area for drying vraic and thus the half-moon shaped area where Octupus restaurant stands was created just for that. No bridge was ever built because tunnel No. 1 soon caved in, but you can get an idea of where it existed as the road narrows sharply just as you approach the Ladies and Gents pools, which were welcome and lasting by-products of the entire development work.