‘He was a lovely man’ – a tribute to Pere Lecluze

KNOWN simply and affectionately as Pere Lecluze, the late Canon Maurice Lecluze was a French Catholic priest who touched the lives of hundreds of island residents during his 42 years of service in Guernsey from 1960 to 2002. 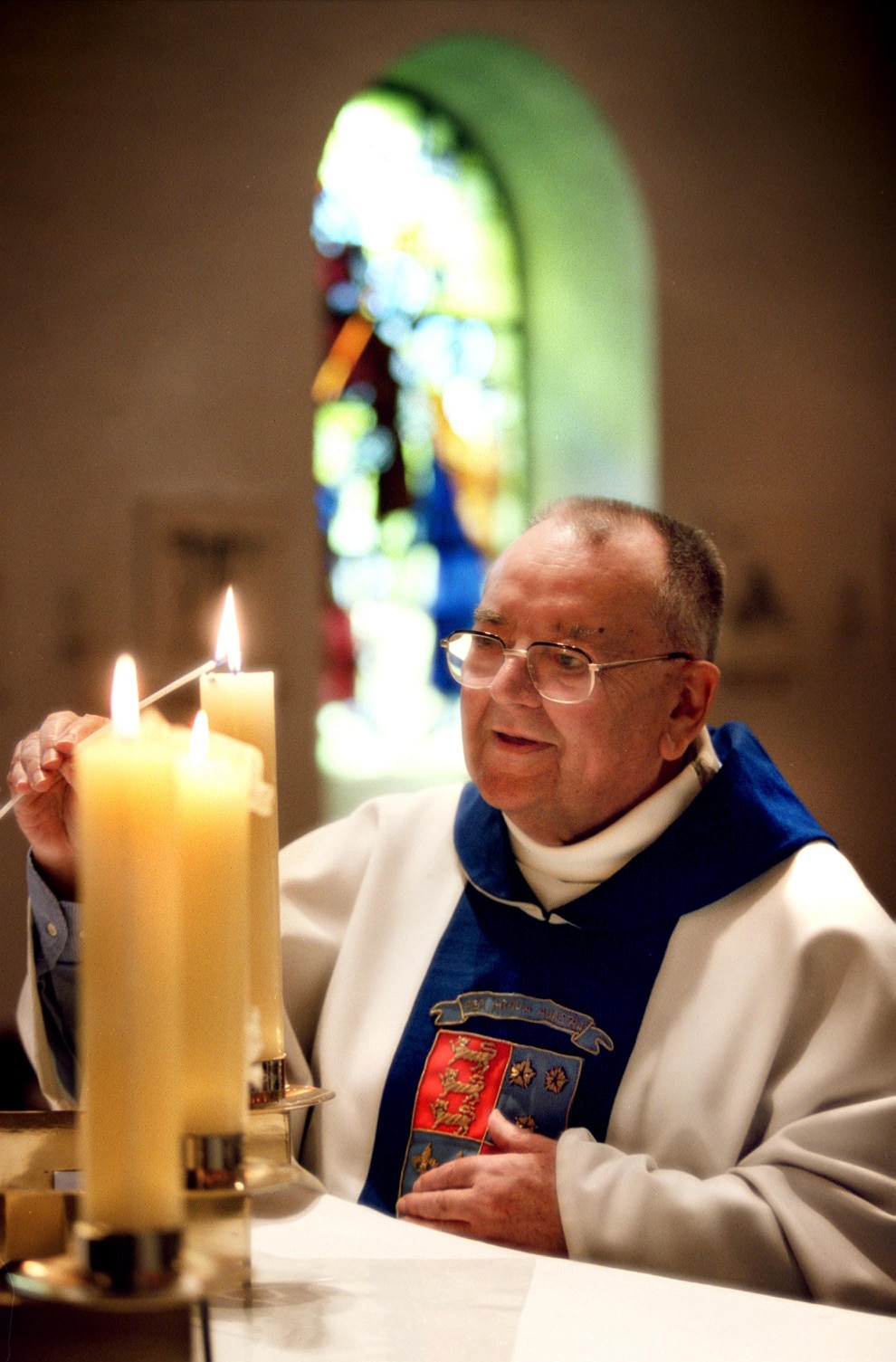 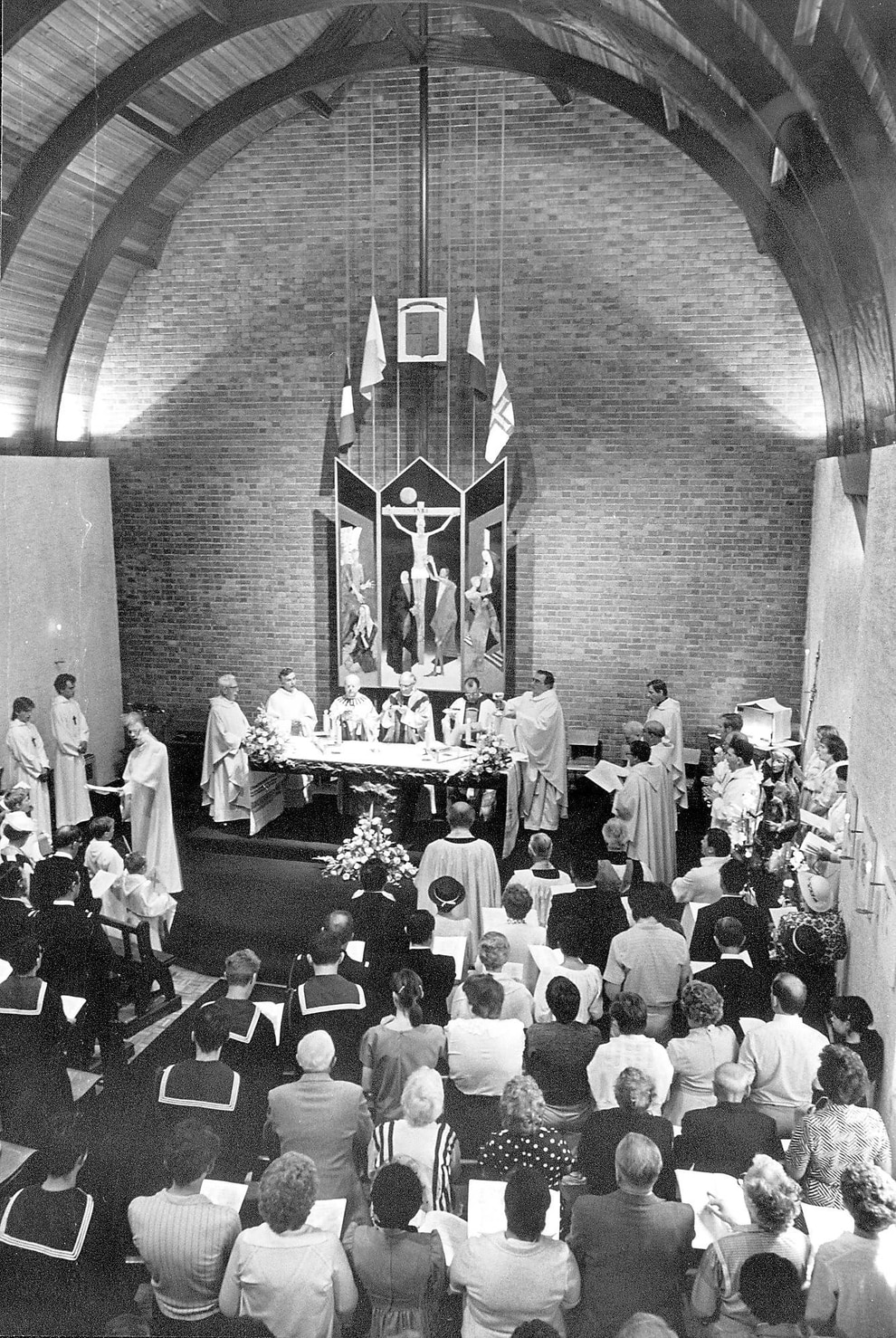 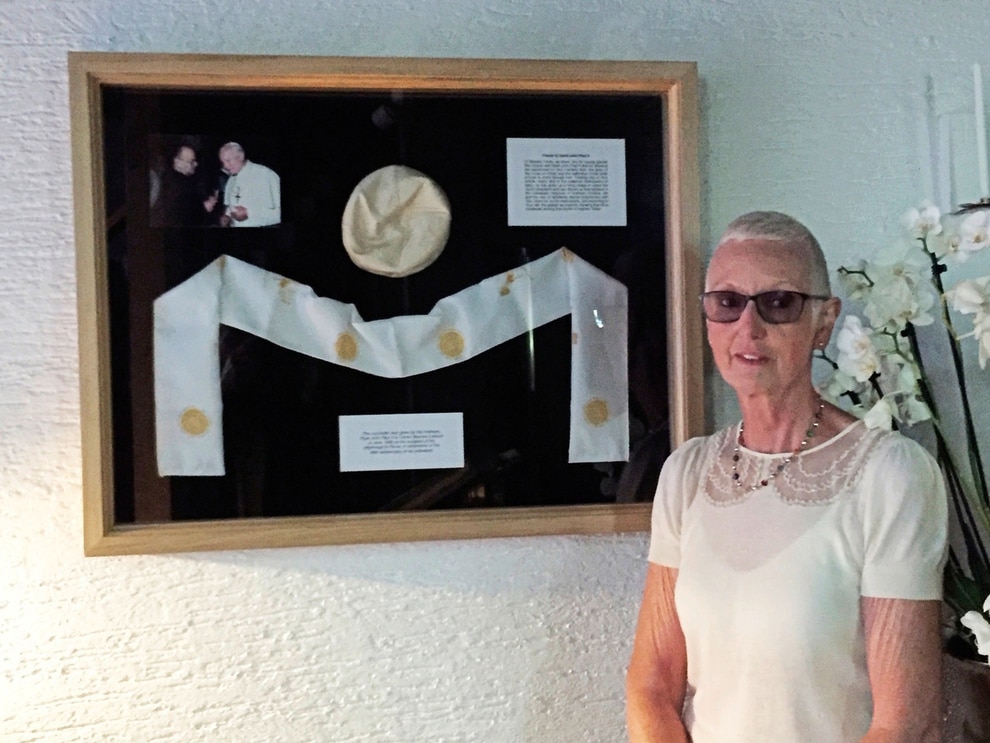 Pat Devenport beside the zucchetto, which was gifted to her by Pere Lecluze's niece, Liliane, and is now on display at Notre Dame du Rosaire. (25835946)

He was most closely associated with the church of Notre Dame du Rosaire in St Peter Port and earlier this summer a zucchetto, or skullcap, which was given to Canon Lecluze by Pope St John Paul II was put on display inside the church.

The zucchetto, along with other small items that belonged to Pere Lecluze, can now be viewed in a glass cabinet near the church entrance.

The former Catholic Dean of Guernsey, Canon Michael Hore, gave his blessing to the display at an informal ceremony held on 29 June.

This exact date was chosen because it was the day Pere Lecluze became ordained 70 years ago. Also, it was on 29 June 1989 when the Guernsey-based priest went to the Vatican, on the 40th anniversary of his ordination, and unexpectedly received the zucchetto from the then Pontiff.

Following Canon Lecluze’s death in 2003, his niece Liliane inherited the skullcap. More recently she gifted it to Pat Devenport, a lifelong parishioner at Notre Dame du Rosaire and a close family friend.

‘Liliane married at the age of 79 in 2015 and my husband and I went over for the wedding,’ Pat explained. ‘It was there that she said “I’ve got this zucchetto, what am I going to do with it?” Because she had no children or family, she asked would I like it and I said that would be lovely.’

The original plan was for Liliane to bring the zucchetto to Guernsey but she fell ill and ended up posting it a couple of years later.

Sadly, she died on Boxing Day last year and never got to see the skullcap on show in the church where her uncle had spent so much of his life.

‘Really, the rightful place was for it to come back here, and it was significant for it not to be at St Joseph’s or one of the other churches but to be here,’ Pat said.

‘It’s kind of done a journey and has come back to its rightful place, which I think Father Lecluze never imagined was going to happen.’

Pat remembered that when Pere Lecluze arrived in Guernsey in 1960 he could not speak a word of English. But within six months he was able to converse well enough, albeit in his very strong Norman French accent that stayed with him over the decades.

She also recalled his fierce commitment to make the badly run-down church of Notre Dame du Rosaire a place fit for worship again. ‘He was passionate from the time he saw the church and it was in a terrible state of repair.

‘People didn’t think it was going to happen because there was very little money in the church at the time and the congregation was diminishing. He went out into the byways and pathways and got people back and then he started with his mission.’

Pere Lecluze knew a lot of influential people in France and he used his contacts to get the work done. No less a figure than General Charles de Gaulle provided the altar stone while a French family contributed towards the new windows and another friend donated the statue of Our Lady.

As well as his highly successful drive to restore Notre Dame du Rosaire to its former glory, Pere Lecluze is remembered for his passion for music and was responsible for launching the musical festivals at the church that attracted many fine visiting artists.

He was also a keen promoter of pilgrimages to France and he won widespread respect for his efforts to reach out beyond the Roman Catholic Church, which made him a very popular and well-known figure throughout the island.

‘He was a very ecumenical person,’ said Pat. ‘He actually broke down a lot of barriers between the Catholic Church and other island churches, other denominations, and other ministers thought very highly of him.

At the end of his 42 years in Guernsey, Pere Lecluze retired in September 2002 to a nursing home in Caen. The following year he returned to the island to visit his closest friends but was taken ill shortly after his arrival.

He died two days later, on 10 August 2003 at the Princess Elizabeth Hospital, and is buried as he wished at Le Foulon, in the same grave as Pere Bourde de la Rogerie, a former priest at Notre Dame du Rosaire.

Fittingly, his funeral service was held in the little church that had become his spiritual home, and it was packed with more than 300 mourners. This was followed at the end of the year by a memorial service led by the then Roman Catholic Bishop of Portsmouth, the Rt Rev. Crispian Hollis.

‘This is an opportunity to pay a tribute to a good friend,’ the Bishop said. ‘He was a lovely man who did a tremendous amount of work within the Catholic community and in the island as a whole.

‘Aside from the actual memories, there will be the permanent memorial that is the church of Notre Dame. He rebuilt it and refurbished it and it now looks beautiful.’