Comedian Ed Byrne heads up the latest Just the Tonic Guernsey comedy nights next week. He talks to Colin Leach about his latest show, If I’m Honest, and getting back on the road after a year of being unable to perform stand-up comedy. ‘Suddenly you realise how much you love it’

Ed Byrne sounded particularly fed up when we spoke a few weeks ago.

‘Ahh, I’m meant to be in York tonight but I’m self-isolating,’ came the distinctive Irish brogue down the phone line.

He has every right to feel frustrated. The usually genial comedian is a household name who has been plying his trade since the early noughties. He has performed sell-out shows and is a regular face on TV with his rapier wit and wry observations and has had his career somewhat curtailed by Covid. However, he is quick to point out that ‘nobody wants to hear about my lockdown experience as we’ve all been through this Groundhog Day scenario.’

His time away from doing stand-up shows has seen him dabble in a bit of televised cooking, growing veg in his allotment and DIY, he tells me.

‘I’ve done some telly, the Celebrity Best Home Cook was a bit of a gas. It’s the sort of thing I wouldn’t normally do because I normally wouldn’t be available, but suddenly I was offered this TV show and I thought, well I’ve just had my tour cancelled.

‘So bits and pieces like that which were nice to do. I got quite handy at gardening too. I know what grows and what doesn’t in my soil. Tatsoi? [An Asian variety of Brassica rapa, I’m reliably informed.] I can talk about tatsoi. Radishes? They love it here. Peas? Not so much. And, erm… I’ve done a bit of woodwork and just, y’know… staring.’

Ed has played Guernsey a few times before, previously at St James in July 2019, although he admits ‘as is usually the case I only got to see the venue, the hotel, the airport…’, so he is looking forward to familiarising himself more with the island next week.

‘Yeah, I’m over for a couple of shows. I’m looking forward to a bit of a stroll around anyway, so I’ll probably get up to no good. I quite fancy cycling actually. I’ll pack my cycling gear.’

So has the time away from performing on stage allowed him to write new material?

‘So I’ll be doing the guts of the show that I previewed back in July 2019. A sort of Covid remix of that.’

Despite being unable to perform his usual, ‘I’ve done a few bits and pieces but they’ve all been weird, socially distanced crowds, crowds with masks on or drive-in gigs or stuff like that, all kinds of different ways to try and make it work – all of which were less than ideal.

‘None of it’s been the usual, and another thing was writing jokes – because the way I write jokes is I think of an idea and I take it down to a comedy club and I try it out and get a feel for what works and what it needs. But all of these gigs have been so unusual – you don’t get the feedback from an audience. You can’t judge any idea that you’ve had or any idea that you’ve thought of, so that’s another reason why the writing’s just been halted, so it will be nice to do a “normal” gig, as it were.’

The conversation turns to his comedy heroes as a youngster. He cites Dave Allen, Billy Connolly and Mike Harding as comedians he enjoyed watching, all of whom use observational comedy, something which he is known for himself.

‘It certainly was when I started off. It was very much “have you ever noticed this” type of thing and as I’ve gotten older it has become more… one would say anecdotal. I’m more likely to tell stories from my life, as more things have happened in my life so I tend to tell stories more about myself than make wry observations. I still make wry observations but it’s more about stuff that has happened to me. Which, as I say, has made the last 18 months pretty tricky.’

So how did you get into stand-up comedy in the first place?

‘I ran a comedy club. I worked in a students’ union and I used to host pub quizzes and stuff like that, so I got a feel for it – for talking to a crowd. And then I started a comedy night in a pub in Glasgow and was the MC and booked the acts. So I did that for a couple of months then I moved to London, where the streets are paved with comedy.’

Who were his contemporaries at the time?

‘People who were on the circuit at the time would have been Julian Barrett, who then went on to be half of the (Mighty) Boosh. He worked solo as quite a surreal stand-up. Peter Kay would have come just about a year or so after, so … Dylan Moran, Ardal O’Hanlan were a year ahead of me, they were all kind of already established on the circuit, when I was doing the open mic gigs and then people like Jimmy Carr and Peter Kay came up a year or two after, but there were loads.’

You’ve done some acting as well, how does that compare with doing stand-up comedy?

Didn’t I read somewhere that he was once up for the role of Doctor Who?

‘No, I never had any indication, never had any calls about that. Someone may have suggested I might have been a good fit for it, but no, I’ve never had a sniff at that.’

His comedy style is by nature quite upbeat and positive, I point out.

‘Well, I try to be. I remember when I started out I quite fancied being the deadpan one-liner kind of comedian but I quite like Michael Redmond, who is quite a deadpan Dublin comic, sort of surreal one liners, I always really liked him. But once I got on stage and it was just... nervous energy, it just wasn’t me. I think Ben Elton said the same thing. He said that he never really wanted to be this fast-talking motor-mouth comic but it was just the nerves and that got to him and I’m a bit like that, I don’t like to leave any gaps.’

The rebooted show, Ed Byrne: If I’m Honest revolves around ‘the fact that you see yourself in your children’.

‘Your children will annoy you in ways no one else will because they are annoying in ways that you will recognise in yourself. You see your faults in them and stuff. I’m talking about what traits do I have that are worth passing on? Is the through line about the whole thing? So it’s a sort of self-examination and an inventory of what traits of mine I want to pass on to my kid.

‘You don’t have to have kids to enjoy it, you don’t even have to have parents, but I think particularly when you reach a certain stage and age where you’re not really gonna change, ha! You know, you get into your 40s and you realise “this is who I am”, as opposed to thinking about what you’re going to be, you just have to have a look at who you really are. And that’s who I’ll be until I croak. I’m just going to be an increasingly cranky version of this.’

Will he keep performing?

‘Sometimes when you’re looking at the string of dates you’ve got to do and you’re thinking, “oh I’m not going to see my family for a long time”, it’s hard. And then something takes it away from you for over a year and suddenly you realise how much you love it.

‘So yeah, I’m very much looking forward to getting back on the road.’

Ed Byrne is at The Duke of Richmond Hotel on Tuesday and Wednesday, with support from Glenn Wool, Daliso Chapondra and Sally-Anne Hayward, from 8pm. To book tickets go to www.justthetonic.seetickets.com 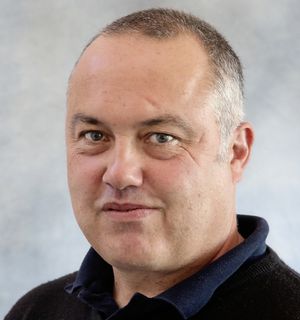 Liberation celebrations to stick with parishes

'People are struggling' as inflation hits 4.6%

Fewer data breaches made to ODPA in 2021

Student kills one and wounds three in shooting at German university