Damian Green hailed the Prime Minister’s leadership, with Mrs May expected to set out when she will resign.

One of Theresa May’s closest allies, Damian Green, has paid tribute to her as her departure draws closer.

The Prime Minister has arrived in Downing Street where she is understood to be meeting 1922 Committee chairman Sir Graham Brady after a cabinet revolt over her latest Brexit plan and the delay of the Withdrawal Agreement Bill (WAB).

Tory backbenchers’ representative Sir Graham is expected to insist that she should set out when she will resign, with a 1922 Committee source telling the Press Association Mrs May’s departure date is likely to be June 10.

Her former de facto deputy Damian Green said a difficult hand to play was made impossible by losing her majority in the snap general election.

He said: “Suddenly and unexpectedly becoming Prime Minister after the seismic shock of the Brexit referendum meant she was dealt an extremely difficult hand to play.

“The truth is, having an election a year later, which cut the Conservative Party’s majority, then at that point it is impossible.”

He said: “I think the key point where it went off the rails was when David Davis resigned from Cabinet.

“I think being able to have a deal that kept him and probably Boris Johnson inside would have made all the difference – that seems to have been the turning point.”

When asked whether he could back Mr Johnson, he told the Today programme: “The answer to the question for almost all the candidates is yes.

“I would find it very difficult to support a candidate who said it was in Britain’s best interest to leave with no deal, leave straight away, WTO…

“I don’t expect any candidate really to say that.”

In a letter to the Tory Party chairman Brandon Lewis, she said: “Regrettably, I must now give notice of my resignation because I wish to actively and openly support one of the new leadership candidates and would not want there to be any perception of a conflict between the candidate’s campaign and my role at CCHQ.

“The PM has, of course, said she will be leaving, a decision that I respect and believe to be right. I have a close relationship with my local Association and they are fully supportive of this decision.”

A 1922 Committee source told the Press Association they expected June 10 to be the day Mrs May chooses.

“Hopefully what will happen is she will stand down as Tory leader I think on or before June 10, and she will hopefully remain as caretaker Prime Minister until such time as a new Tory leader is elected,” they said.

“My feeling is that she will stay until June 10.”

Mrs May’s leadership appears fatally damaged by the reaction to her latest Brexit deal, which offers MPs a vote on whether to hold a second referendum and a choice which could leave the UK in a temporary customs union with the EU – both measures which are unacceptable to Tory Eurosceptics.

The scale of Cabinet anger at the legislation – which led to Andrea Leadsom’s resignation as leader of the House of Commons on Wednesday night – was made clear by two of Mrs May’s most senior ministers.

It was a “step too far” to ask Tory MPs to vote for it under those circumstances, he told the Prime Minister.

The WAB had been due to be published on Friday but that has been delayed in a sign of the chaos at the top of the Government.

MPs were told that the Government now intends to publish the Bill in the week beginning June 3.

In response to a question following a speech at the National Cyber Security Centre, he said: “Theresa May will be Prime Minister to welcome him and rightly so.”

Digital minister Margot James told the Press Association Mrs May was “being hounded out of office because Parliament will not make a decision and the parties just have an inability to compromise” over Brexit. 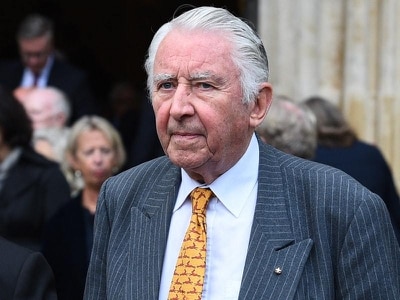