Talks are set to indicate whether or not discussions between Boris Johnson and Leo Varadkar paved the way for a potential breakthrough.

European Council president Mr Tusk offered Boris Johnson lukewarm hope that progress could be made, but warned that the UK has still not presented “a workable, realistic proposal”.

Mr Barclay and Mr Barnier met in Brussels on Friday morning as chances of a breakthrough appeared to rise after face-to-face talks between the Prime Minister and Irish Taoiseach Mr Varadkar.

The two leaders released a joint statement saying they could “see a pathway” to a possible agreement.

Mr Barclay’s talks should give the clearest indication on whether there has been a significant thawing of relations between London and Brussels after a week of abrupt exchanges.

As the meeting got under way, Mr Tusk tweeted: “The UK has still not come forward with a workable, realistic proposal. But I have received promising signals from Taoiseach
@LeoVaradkar that a deal is possible.

“Even the slightest chance must be used. A no deal #Brexit will never be the choice of the EU.”

Dramatic progress could lead to the start of so-called intensive “tunnel” negotiations in the coming days ahead of the crunch EU heads of government summit on October 17 and 18.

The unexpectedly cordial atmosphere of the meeting between the two prime ministers led to speculation of a possible compromise on the contentious issue of the Northern Ireland border backstop.

Sterling rose sharply on international money markets in the wake of the talks.

Education Secretary Gavin Williamson said that the Cabinet had been briefed on the meeting, but would not explain what concessions may have prompted the surprise optimism.

“It does not benefit anyone to have a running commentary on live negotiations,” he told BBC Radio 4’s Today programme.

After more than two hours of “detailed and constructive” discussions at a country manor on the Wirral on Thursday, the two leaders said it was in “everybody’s interest” to get an agreement which would allow the UK to leave with a deal.

Mr Varadkar said he hoped the progress they had made would be “sufficient” to enable intensive negotiations to resume in Brussels ahead of next week’s crucial EU summit.

“In terms of how long it will take, I can’t predict that with any certainty, but I think all sides would like there to be an agreement next week at the council if possible.

“Obviously there’s a further deadline after that which is October 31, so I would say a short pathway rather than a long one, but it’s impossible to predict that for sure.”

Tory former chancellor and arch-Brexiteer Lord Norman Lamont said he wanted to know what any UK concessions were.

He told the BBC: “No, I am not worried. I have to know what the concessions are.

“It does look as though there is a change of mood.”

He added: “Maybe there is some change on the mechanism whereby the deal is approved by the Northern Ireland Assembly and Executive.

“Maybe there will be an opting-out mechanism rather than an opting-in mechanism.”

Briefings by anonymous Downing Street sources had accused Mr Varadkar of backtracking on previous commitments to try to find a deal, and of refusing to negotiate.

And following a heated telephone call between Mr Johnson and German Chancellor Angela Merkel on Tuesday, Number 10 sources claimed the EU was making it “essentially impossible” for Britain to leave with a deal.

On Wednesday, Mr Barnier told the European Parliament there was still no basis for a fresh agreement.

He said the UK had yet to put forward an “operational, legally binding solution” to replace the Northern Ireland backstop – intended to prevent the return of a hard border with the Republic.

Without a deal, Mr Johnson will face demands from opposition parties to comply with the so-called Benn Act which would require him to request a three-month Brexit delay if there is no agreement by October 19.

The PM has said while he will abide by the law, he is determined to leave on the Halloween deadline of October 31 come what may.

Government sources have said ministers are preparing to hold an emergency Saturday sitting of Parliament on October 19.

Many MPs believe if he cannot get a deal, Mr Johnson will use the occasion to push for a “people versus Parliament” general election, possibly as early as next month.

If a deal did emerge, Mr Johnson would also need the backing of the DUP and Eurosceptic Tories to have any chance of getting it through without opposition support.

Lord Lamont said he thought Labour MPs were wary of an early election.

He said: “Backbench Labour MPs, I understand, are really very nervous about it.

“I think they don’t want it, and I wouldn’t be at all surprised if we didn’t slide into next year.”

Lord Lamont said the Tories would choose to fight any election on a no-deal stance if they failed to achieve an agreement with Brussels. 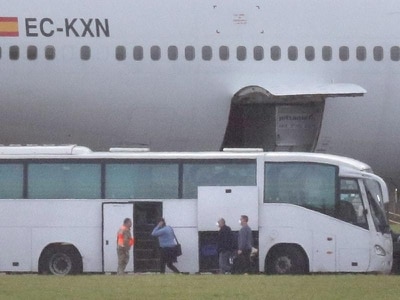