Derek Lincoln abused two girls at addresses in Ayrshire, Renfrewshire and Lanarkshire from the ages of nine and 11 in the late 80s and early 90s.

A member of the Children of God cult has been jailed for 11 years and six months after pleading guilty to the historic rape and sexual assaults of two young girls.

Derek Lincoln abused the children at addresses in Ayrshire, Renfrewshire and Lanarkshire from the ages of nine and 11 between 1989 and 1996.

The now 74-year-old, who is also known as John Green, was a member of the religious group along with the girls.

During his previous court appearance it was said that Lincoln abused the younger child until she was 13.

“You had two victims, both young girls, in respect of whom you were in a position of the utmost trust.

“You were all members of a so-called religious group and they had little contact with the outside world. They were entitled to look to you for love, care and protection but instead you used them for your own gratification.

“As far as the first of these girls is concerned, you raped her numerous times and subjected her to other degrading sexual practices, including sodomy, on many occasions.

“At one point she tried to kill herself by drinking what she thought was turpentine but it only made her ill and she was forced to stay in an attic room.”

“You could have chosen to help these little girls to have a happy childhood and prepare for adolescence and adulthood in a loving, caring environment but instead you stole their innocence and sacrificed their dreams on the altar of your own perverted desires.”

One of his victims reported the abuse to Hertfordshire Constabulary in 2014, according to Police Scotland.

Lincoln was then returned to Scotland from France on a European Arrest Warrant in July 2019 and pleaded guilty to seven charges including rape and assault last month.

Lord Matthews also ordered him to be placed on the sex offenders register indefinitely.

Fraser Gibson, procurator fiscal for sexual offences, said of Lincoln: “His actions have devastated the lives of his victims; however, it is thanks to their courage and strength that he has now been caught and prosecuted.”

Hope Bastine, a survivor of the sexual abuse who has waived her right to anonymity, released a statement after the conviction.

The 41-year-old said: “Words cannot describe how I feel today after the conclusion of my 16-year fight for justice.

“My childhood and adolescence were cruelly stolen from me by a man who repeatedly abused me within a religious cult which legitimised his actions.

“By incarcerating my abuser for 11-and-a-half years, Lord Matthews has set me free. Finally, I can give myself permission to pursue happiness and peace.” 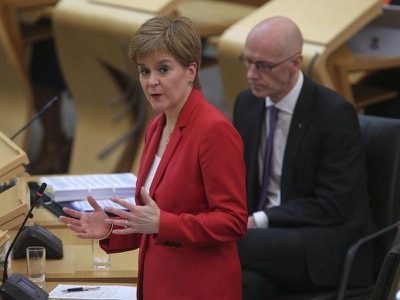