The rise of the new Puritans

HISTORY is a bit like fashion in that the same things just keep coming around and around again. For instance if you wait long enough, your collection of flared trousers in the back of the wardrobe will be as hot as a hot thing in a very hot place.

You may or may not have guessed from my turn of phrase that I’ve been re-watching old Blackadders on YouTube.

It struck me during the scene where Miriam Margolyes, before National Treasure status had been conferred upon her, playing the ridiculously devout Lady Whiteadder, dines upon a somewhat suggestively shaped turnip, that the purity once espoused by religious nutcases did not disappear forever in the 17th century but has returned with a vengeance in the 21st.

Yes folks, the Puritans are back.

To be fair, they never really left us, but their political power peaked during the Cromwell Protectorate, when even Christmas was banned because there was too much fun to be had for it to be right and proper. He never went quite as far as the Whiteadders, who denounced the comfort of chairs, preferring a good spike to sit upon, but who knows what future plans he had?

Being puritanical has in the past been mostly applied to religion and sex and with the death of Christianity and the rise of total liberalism in all things sexual, it did seem as though purity had been consigned to Western history once and for all.

But no, the descendants of the zealots who found solace in Puritanism just had to find an outlet for the built-up pressure of undeclared purity within them before they exploded.

Just when it seemed there was no safety valve, along came a saviour who guided them as a shepherd guides his sheep to a place where they could espouse their new morality and be severely critical of others.

Like the second iteration of the mighty Poseidon, he delivered his message to millions who desperately needed something to fill the void inside them and he didn’t disappoint them.

In Blackadder, the Whiteadders are adorned in simple, rough-spun, plain habits but decorated with many wooden crosses, the symbol of their cult, on their shoulders and even on their heads. They eat only raw vegetables, which cannot even be mashed for fear of interfering with The Divine One’s intention for turnips, and avoid all earthly comforts for fear of taking pleasure from them.

Confirmation of the New Puritan movement came from seeing Extinction Rebellion activists in very similar dress, the crosses being replaced by the somewhat creepy-looking hourglass logo, including one upon the head of the cultists.

If Mary Whitehouse was alive today, she would not be campaigning to ban the depravity of mini skirts but instead would be a keyboard warrior advocating a plant-based diet and shaming everyone who puts potato peelings in a black sack.

Just as we found Mrs Whitehouse to be a bit ridiculous, and time has proven her to have been wrong, I’m pretty sure the next generation will laugh at Mr Broccoli’s antics in a similar way.

Possibly some of the conflict between the Puritans and those of us who want to enjoy life is that the liberals aren’t usually concerned with purity. In the past the conservatives had grasped purity as their thing and so are a bit confused when the hippies claim the moral high ground that has been theirs for millennia.

At least this lot of Puritans don’t keep warm like the Whiteadders by burning Catholics. In fact, they are probably not big on bonfires, what with all the particulates and everything.

As with everything in life, there is a happy middle path, which is the one to follow and the one that will deliver the best results. Zealots never succeed in the long term because they are too extreme for their times and the effort of maintaining impossible perfection over time is too much to ask of the common man.

I’m sure many of the Puritans of Extinction Rebellion are absolutely sincere, just as the Catholic-burning Puritans of the past were sincere in their beliefs. But we know they were too extreme and that working and living together in harmony to achieve as happy and fruitful a life as possible for all is the best strategy. Even if it takes a bit longer.

Holding up traffic in Jersey might be fun, but you will achieve more from taking us with you on your journey, than by preventing us from literally reaching our desired destinations.

Frightening children will not solve our problem of climate change. Action is being taken everywhere and society is changing for the better. We will achieve more by compromise than we will by conflict and so I suggest you think back to your hippy roots and focus on peace and love. Or as Mr Broccoli would probably say, Peas for Lunch.

Why am I so irritated by XR activists?

Because it worries me that in our first IWV general election next year we are going to see lots of single issue candidates supported by very professional lobby groups entering the Assembly. Given the number of existing deputies who are standing down, plus the ones who will not retain their seats, I predict a very high proportion of first-timers forming our government next year.

We need a strong and stable States of Guernsey which realises that the economy underpins our independence, pays for our social services and provides opportunities for our children. I don’t want an Assembly which focuses on the rights of people in China, the plight of the starving in Africa or the state of the Pacific Ocean.

All of those are great causes and we should have an opinion and help where we can, but we can best do that by staying solvent and to do that we need exceptional people to lead us and not, I suggest, hippies. 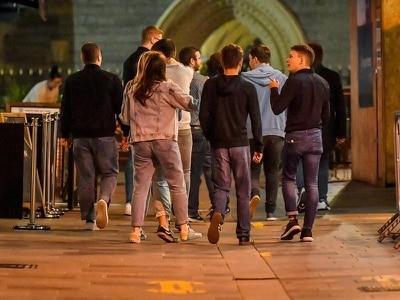