How much is too much to spend on ‘economic enablement’?

Will ‘open skies’ provide a long-term fillip to Guernsey’s connectivity or are we just seeing the sugar rush before the negative impacts start to kick in?

How well is Aurigny being run?

These four, very much interrelated, questions have been kicking around my head ever since the shocking announcement that our States-owned airline was heading for a loss somewhere north of £7m. this year.

Let me start by stating that I was one of the deputies who voted to buy Aurigny all those years ago. I would do so again in a heartbeat. We bought it as an insurance policy to ensure we always had a connection to a London hub airport. We had already just lost Heathrow and with BA pulling out we were going to be left with just Flybe on the Gatwick route.

The advice was clear. The only way to retain slots at Gatwick for use on the Guernsey route was to buy them, but a government couldn’t own any slots itself, only an airline could. So the only way Guernsey could own slots was to own an airline.

That imperative is as valid now as it was back then, so I definitely do not advocate getting rid of Aurigny. But neither is it reasonable to the taxpayer to write the airline an open cheque. So as the impact of open skies starts to become clear, this is definitely the right time to review what we expect of Aurigny. After all, its operations today go way beyond what we bought it for – ensuring that Gatwick link. The recent shocking financial update should only give more urgency to that review process.

What about ‘economic enablement’? It sounds like a warm and cuddly expression. After all, we all want the local economy to thrive so anything which enables that must be a good thing, mustn’t it? Well, to a point, but we surely need to know that the benefit is actually greater than the outlay.

With £7m. now going into Aurigny, an even bigger subsidy per passenger going to Flybe to provide the Heathrow link, and talk about ongoing subsidies being needed to attract operators between Guernsey and both Rennes and Bordeaux, the cost of ‘economic enablement’ is certainly ratcheting up.

A simple mind like mine says that if we are spending, say, £10m. on economic enablement by way of subsidising air routes, then we really need to measure the returns on that investment. If they amount to a £20m. benefit, then fair enough. If it is closer to £5m., then what the heck are we playing at? Particularly when some of the money is coming from Guernsey taxpayers who can rarely, if ever, afford to travel by air.

That brings us on to ‘open skies’. Advocates of the policy are currently glorying in the addition of new routes and the resulting uptick in total passenger movements since it was introduced. For me the jury is still out. There were always going to be pros and cons to deregulation, with the benefits arriving before any negative consequences.

So far what we have seen is airlines taking advantage to open up new routes. That is very welcome, but it does of course have the side-effect of making some existing routes far less viable. In time we are bound to lose some of those long-standing routes or see them scaled back to meet the reduced levels of demand.

In theory that should mean that the routes which people really want to use thrive, while those which are less popular wither on the vine. A sort of aviation version of the survival of the fittest which means the market adjusts itself to the passengers’ demands.

Fine, but in the Guernsey context that is likely to mean every airline ‘chasing the cream’ and offering flights only at peak times or even only during peak seasons rather than frequent, year-round, regular services.

All that is fine and dandy with respect to new routes – after all it will still be a net sum gain – but I suspect many people will be vexed when some of the traditional services they have been used to and relied on over the years are discontinued. Hard cheese. In the brave new world of open skies only the most profitable services will survive – unless of course they are subsidised to ‘enable our economy’. So don’t blame Aurigny if they shrink their route network or even reduce frequency on the lifeline Gatwick route in an attempt to match supply with demand and thereby stem their losses.

None of that answers my fourth question – how well is Aurigny being run? I know nothing about running an airline and nor do my colleagues, so if the States ever attempts to run Aurigny instead of just owning it that will be a recipe for disaster. But I do still have a number of amateur observations.

Firstly, that before Malcolm Hart suddenly disappeared off the scene (not sure what happened there) Aurigny seemed to be run with its feet rather more firmly on the ground. To some he may have seemed a bit of a rough diamond but I always appreciated his gritty realism. In more recent years the Aurigny operation has seemed to me to be rather more experimental and aspirational than rooted in black and white pragmatism.

Secondly, I always did wonder if buying a jet was the best response to the sudden loss of capacity on the Guernsey-Gatwick route when Flybe pulled out. Would it have been better to try to buy another one or two Gatwick slots and run a very frequent service using ATRs, which are much more economical and fuel-efficient and would have meant fewer different aircraft types to maintain? This could even have been supplemented by services to Stansted or Southampton for those looking to actually visit London rather than make connections to further afield.

I know the counter-argument is that the day may come when Gatwick will no longer accept ATRs, but maybe that would have been the time to buy a costly jet.

Then there is Alderney. While the romantics looking back to the good old days when inter-island flights could be run with one pilot and no pesky security checks may exaggerate how badly the Alderney operation has been run in recent years, there is no doubt that the transition from Trislanders to Dorniers was not handled well.

So how well/badly is Aurigny being run? I don’t know the answer, but we need an expert opinion as part of any review into how to stem their unsustainable losses. 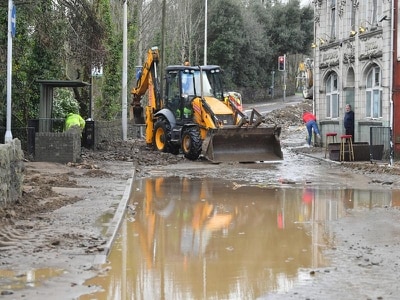