Royals close in on a fourth straight final

THE champions already have a foot in the Nedgroup Trust Limited Scratch League final. 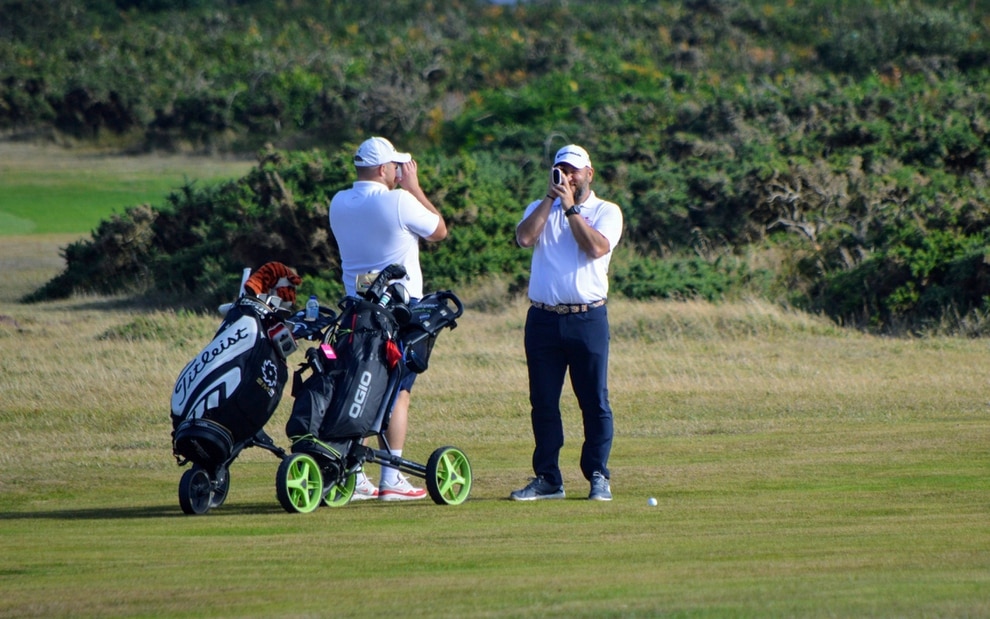 Roland Mills checks the distance to the pin while playing partner Tom Le Huray measures his drive on the fourth. (Picture by Gareth Le Prevost, 28515236) 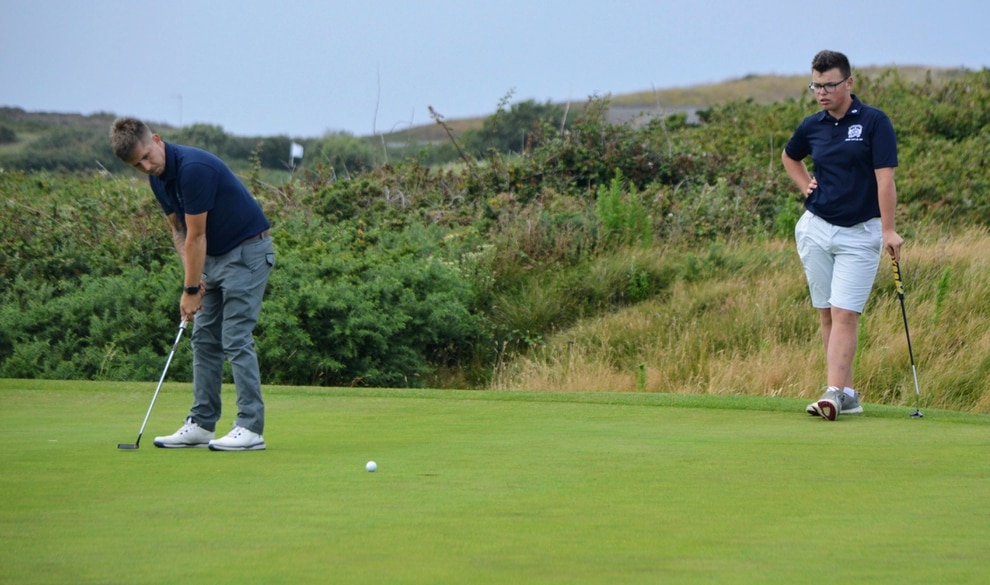 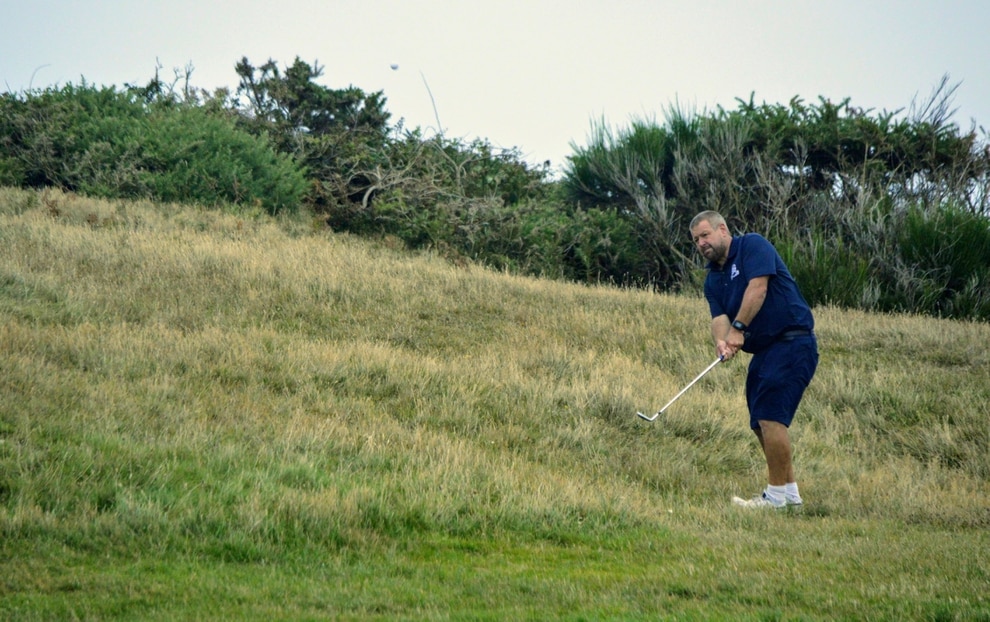 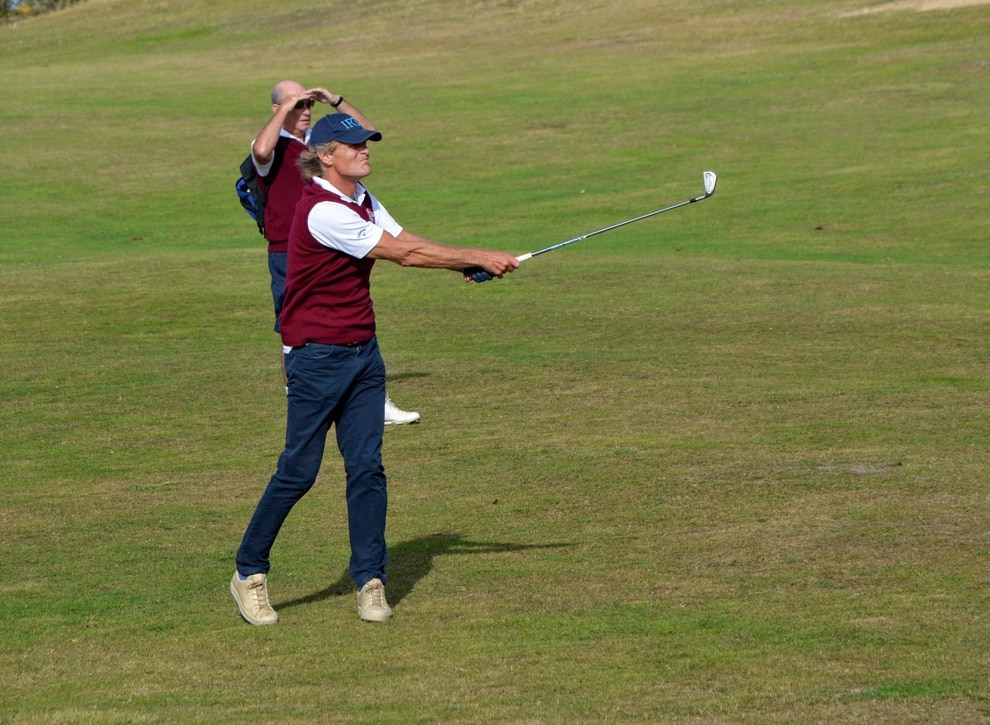 Daniel Griggs hits his approach at the first hole into the teeth of the wind. (Picture by Gareth Le Prevost, 28515227)

The Royal Guernsey Royals put home advantage to good use against the La Grande Mare Douit Dodgers on Monday evening, completing a clean sweep of four wins on the day to establish a healthy lead at the top of the round-robin table with each club having now played twice.

Given the conditions and the quality in the Royals line-up on their home track, they were always going to be hot favourites.

While the welcome in the clubhouse was a traditionally warm one, the links itself was a pretty inhospitable place to be with a force six blowing straight into the players’ faces on the first tee and the sunshine only making a brief appearance when they set out on their rounds.

By the time the final rubber came to a conclusion on the 16th at around 8.50pm, the light was on the dark side of gloomy.

The main talking point before heading out centred on the nearest-the-pin bonuses and predictions of all being claimed on the seventh, which was playing down wind, and not one registered on the 12th, as it was into the teeth of it, so nearly came true.

Of all people, it was the Island men’s team captain Dave Jeffery who silenced the doubters and came up trumps up the hill on the 12th.

Playing against the team he represented during the first three editions of the Scratch League, Jeffery needed a three-wood to reach the green, but he caught it sweetly and knocked a beauty to 15ft for the only bonus on that hole.

As it turned out, it was only good enough for a half as Louis Sheppard and Tim Halden made a remarkable par save from 30-odd yards left of the hole.

However, Jeffery and playing partner Wayne Harwood were soon adding another bonus point to their tally as they wrapped up a comfortable victory on the next hole.

Sheppard did manage the consolation of claiming a nearest-the-pin point on the seventh, though, as he finished 10ft inside Harwood’s ball.

That matched the effort of junior Island champion Ollie Chedhomme, who hit the best approach of the evening on that par three, finishing just 8ft short of the hole, which was cut right at the back of the green.

The youngster joined forces with Ben Hibbins in the foursomes and they had a tough task on their hands against the Guernsey pairing of Tom Le Huray and Roland Mills.

Despite being behind for much of the round, though, to their credit the LGM duo persevered impressively and earned their team another point by taking the Royals captain and his partner to the 18th.

In the singles, Dale Rutledge made it two wins from two in his Royals career with a convincing 6 & 5 victory over Tommy Bruley. The New Zealander’s six-point haul included a nearest-the-pin in the seventh where he just crept onto the front edge of the putting surface.

Rick Le Poidevin was mightily unlucky to miss out on a nearest-the-pin at the same hole in his match with Daniel Griggs, who was 20ft from the cup while his opponent was 21ft away.

Although Le Poidevin pulled a lot of shots left on the night as he tried to contend with the wind, his fighting spirit kept him well in his match at just 1 down walking to the 14th tee.

However, two good strikes from Griggs on the par five helped him to double his lead and when Le Poidevin found gorse with his second shot on the 16th, a handshake soon followed.

The Royals are back in action again on Monday as they host neighbours L’Ancresse Martellos.

McDonald’s carries out tests in preparation to reopen restaurants