Manor pays tribute to the man behind its trains 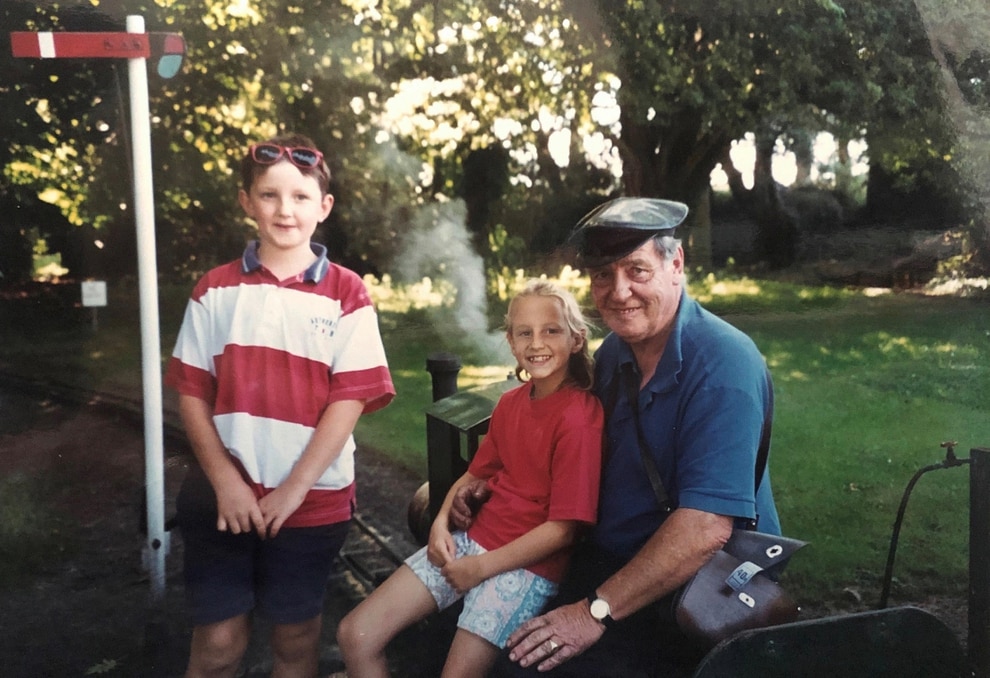 Terry Lee with this granddaughter, Joanna Mauger, and her cousin, Chris Skraba, pictured at the model railway in its heyday. (25037320) The flag outside Sausmarez Manor flies at half mast in remembrance of one its most dedicated and skilled contributors. (25037323)

His long-term friend and employer until Mr Leigh’s retirement in 1996, Peter de Sausmarez remembers Mr Leigh as the man who built ‘one of the greatest indoor train displays in the British Isles’.

The display, essentially a working city with moving cars, level crossings and traffic lights, ran from 1983 until 1997 when the Guernsey Model Railway Club could no longer manage it.

However, the outdoor railway that Mr Leigh built still exists and is open every day of the school holidays.

Born in Edmonton, London on 11 November 1931, Mr Leigh was a mechanical electrical engineer by profession and he brought this analytical attention to detail to his passion for railways.

Moving to Guernsey in 1959, he worked for Ericssons Telephones as an engineer before beginning at Sausmarez Manor in 1983.

He built all four locomotives which have run on the outdoor track, built from plans, sometimes over a period of five years. Two of the stock were steam-powered.

‘It was very technical,’ said Mr de Sausmarez. ‘Steam technology requires you to be extremely precise. Terry would be here all day, rarely a weekend off, then he’d be off home, have a bite to eat and then into the workshop to carry on his constructions. One of the rolling stock, a diesel-electric locomotive, Remus, is the train which still runs on the railway today.’

Mr Leigh in his time at Sausmarez Manor was an invaluable member of the manor’s community and children from all over the Channel Islands and further afield rode the railway he built.

‘He was very fortunate in that he was able to turn his passion into his job, which very few of us get the opportunity to do. He was a much-loved figure among generations of boys and girls who visited Sausmarez Manor, but also among all ages. The oldest rider of the train we had was 87 years old and our oldest driver was 78 – we’ve also had two women as drivers. Terry was quite amazing – he would keep up to date with children that visited and always took the time to be caring and friendly.’

Mr de Sausmarez wants to keep the railway open for as long as possible in honour of its creator, however it is currently facing some difficulties.

‘Our driver has recently had to depart due to family reasons and we currently do not have a driver, so if anyone would like to come and work on the railway please contact me. It is very important that we keep the railway in operation for as long as possible.’

Mr Leigh’s granddaughter, Joanna Mauger, said: ‘As a family we were all so proud of our dad and grandfather and beyond pleased that many people had so much joy from riding the train and seeing the indoor railway he worked so hard on.

‘It meant a lot to him to bring fun and laughter to everyone that visited and we hope it can be enjoyed for many years to come. He was an incredibly special person and we’re honoured that he’s being remember in this article.’