TWO care workers were taken to hospital on Tuesday evening after the car in which they were going to work was involved in a crash. 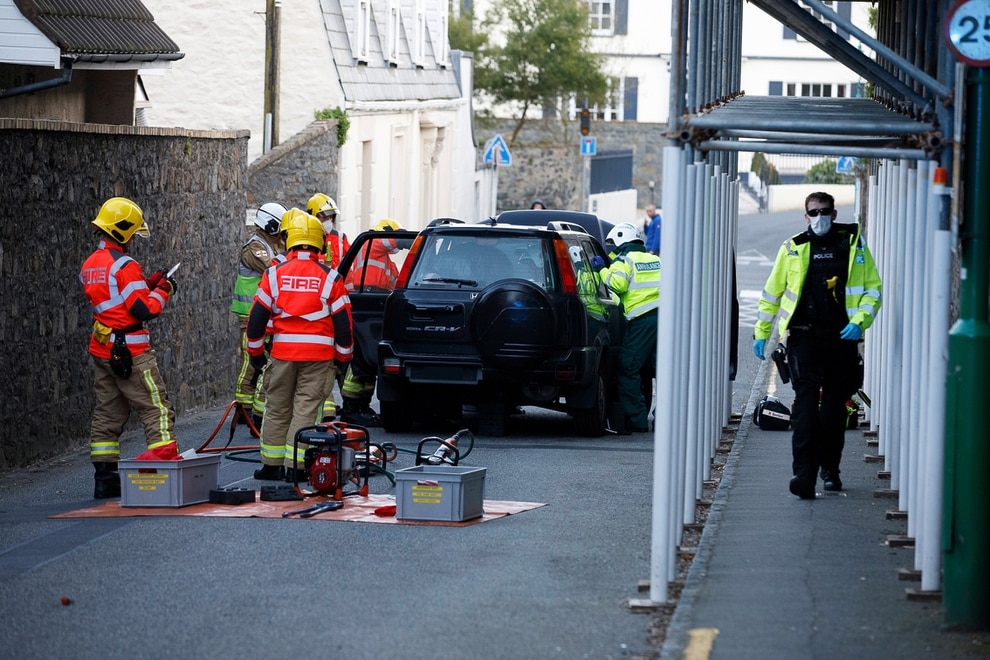 Police and firefighters work protective masks while dealing with a crash that occurred at the Doyle Road/Grange junction on Tuesday evening. (Picture by Tom Videlo) Cheryl Harvey, 58, a senior care worker at GreenAcres Specialist Dementia Care Home, had picked up a colleague for the night shift and was at the traffic light junction of Doyle Road and The Grange when the collision occurred at about 7pm.

‘I had just been saying to my passenger how quiet the roads were,’ she said.

‘My car went onto two wheels. All I can remember thinking is that we were going to hit the scaffolding in Vauvert.’

After it came to rest, she got out, apparently uninjured, but her passenger was trapped.

Miss Harvey called the emergency services, and the Fire and Rescue Service had to cut the other woman out of the car.

The St John Emergency Ambulance Service took her to the PEH Emergency Department for assessment but she was released later having suffered minor injuries.

‘At the time I didn’t think I was hurt,’ said Miss Harvey.

‘I think the adrenaline takes over.’

She had intended to go on to work, but while she was standing talking to a police officer she said she started to ache and her legs buckled.

There followed a trip to the Emergency Department where she said she was told she had neck strain – what used to be called whiplash – and was released after being checked over.

Miss Harvey said her bosses from the care home, Paul and Moira Boyd, took her and her colleague home, and she could not thank them enough for their help.

As soon as she got home she put up a Facebook post thanking them for their support and, as a result, received messages from two local garages offering her a free car to use for the time being.

She hoped to be back at work by the end of the week, although her colleague might be off longer due to an old shoulder injury possibly being aggravated by the crash.

On a lighter note, Miss Harvey said one positive thing had come out of the collision: ‘I’ve always wanted to drive on two wheels, like you see in the films,’ she said.

‘Now I can cross that off my bucket list.’

n Earlier in the evening, at about 5pm, the emergency services attended a crash between a motorcycle and a bicycle at the junction of Rue des Portelets and Route de Crolier at Rocquaine. Two casualties were assessed and treated at the scene, one requiring transfer by ambulance to the Emergency Department for further treatment. The second person was discharged on-scene. The emergency ambulance service responded to 19 calls yesterday.