A MYSTERIOUS tunnel under a former Nazi prison bathhouse has been investigated by archaeologists studying the remains of Lager Sylt concentration camp on Alderney. 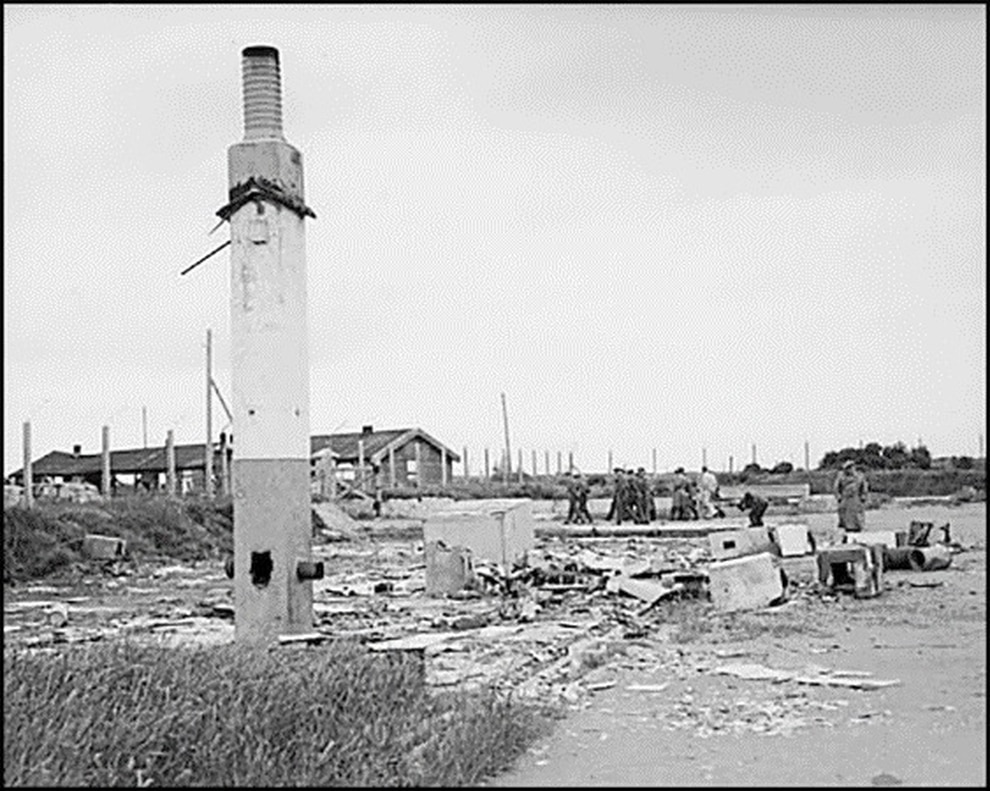 Sylt Concentration Camp in Alderney, pictured after the Nazi surrender. (Picture courtesy of Trustees of the Royal Air Force Museum) 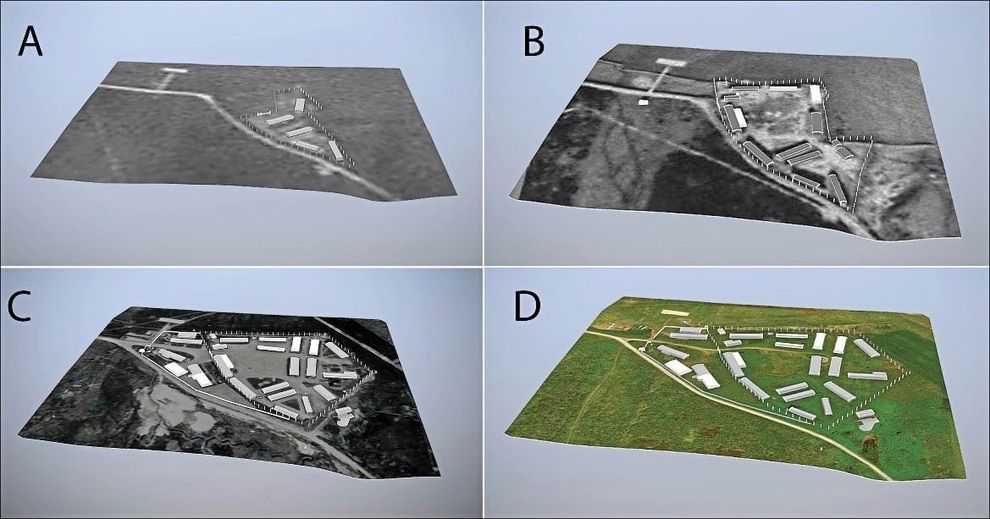 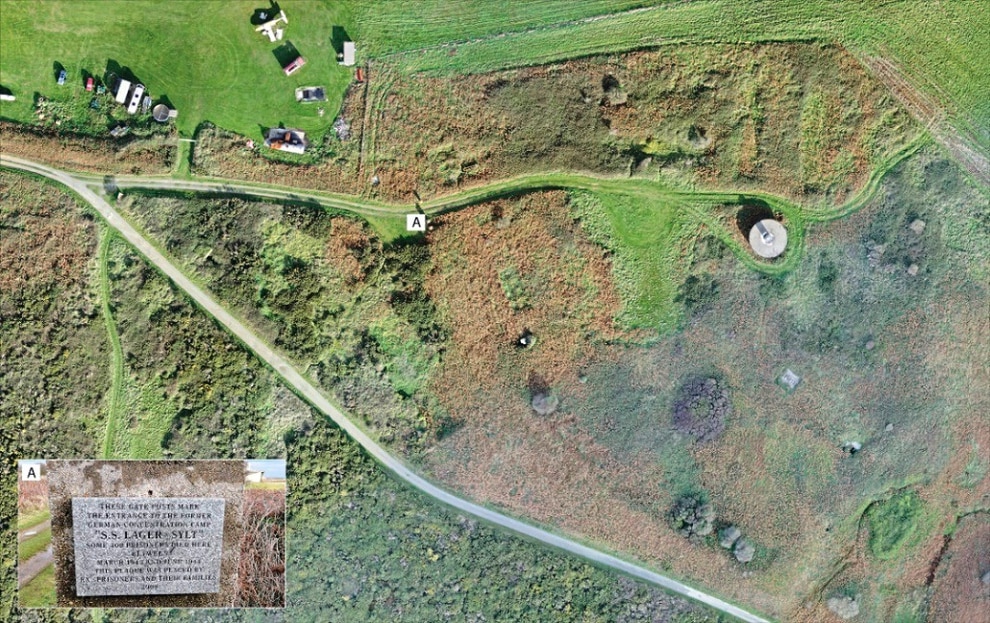 Image taken by a drone showing the remains of Sylt. ‘A’ marks the location of a memorial plaque at the site, inset. (Image courtesy of Centre of Archaeology, Staffordshire University and FlyThru)

Professor Caroline Sturdy Colls and a team of archaeologists from Staffordshire University have been trying to find out more about life at the camp, which was built in 1942 and then closed and destroyed in 1944.

Now their findings have been published in the latest issue of Antiquity journal.

Originally used to house a few hundred political prisoners, Sylt was later turned into a concentration and slave camp, with a population of more than 1,000.

‘This work has shed new light on the German occupation of Alderney and, crucially, the experiences of the thousands of forced and slave labourers who were sent there,’ said Professor Sturdy Colls.

‘Historical, forensic and archaeological approaches have finally offered the possibility to uncover new evidence and give a voice to those who suffered and died on Alderney so many years ago.’

The labourers were forced to build coastal defences as part of Hitler’s Atlantic Wall.

Conditions in the camp were tough and 20% of the camp’s population died in the first four months alone.

The research Professor Sturdy Colls and her team carried out at Sylt allowed them to track how it changed from forced labour prison to concentration camp.

This revealed the camp dramatically increased in both size and security measures in the process.

This research also uncovered additional details about many of the camp’s buildings and the harsh conditions prisoners faced. Mapping out the barracks showed the extent of the extreme overcrowding, with less than 1.5 square metres for each person.

It has for many years been difficult to find out details of what life in the camp was life.

Most of Alderney’s population was evacuated before the Occupation and the SS destroyed much of the camp before Liberation. A post-war investigation was carried out, but this was not released until 1981.

The latest investigation aimed to shed more light on the camp. They studied declassified aerial reconnaissance photos and other historic accounts, and carried out geophysical surveys and used lidar – a detection system which uses light – to map the site, and exploring what remains in the island.

Several camps were built on Alderney to house forced labourers. Many of them came from eastern Europe.

Sylt was originally one of the smaller of these camps, built in 1942 to house 100 to 200 prisoners. But the SS took over in 1943, turning Sylt and Norderney into concentration camps.

At Sylt, the number of inmates ballooned to at least 1,000 and at least 103 died, according to SS documentation.

However, sources report many more perished. In total, at least 700 people died at the labour and concentration camps on Alderney, and more died travelling to or from them.

Aerial photography and geophysical data captured the camp’s dramatic increase in size as it became a concentration camp, with the number of prisoner barracks more than doubling over time.

However, the camp population quintupled at the same time, bringing severe overcrowding, something attested to in the accounts of survivors and the new archaeological evidence.

Former Sylt prisoner Wilhelm Wernegau remembers there being about 150 men in his barracks, with each building just half the size of a basketball court.

‘We had straw blankets and throughout the time on Alderney we suffered terribly from lice,’ he said.

These conditions resulted in a typhus outbreak at Sylt, which may have killed up to 200 prisoners. Security measures also increased as the camp evolved, with additional barbed wire fences and watchtowers built.

The archaeologists also investigated a tunnel travelling from inside a bathhouse to outside the camp’s walls, close to the commandant’s villa.

Electric lighting suggests it was well used, but no mention of it is made in the historical record.

Possibilities include it being a way for guards to reach a bomb shelter, or for them to bring women in for a brothel. The date of the tunnel’s construction remains unclear, although aerial reconnaissance suggests that it was probably built between February and August 1943.

More research will need to be done to shed further light on the function of the tunnel, as well as other aspects of the camps.

Little remains visible of the camp. The SS quarters and washrooms sites are now on Alderney Airport land, while the rest of the camp is on privately-owned property. Under vegetation in the prisoner area there is still evidence of the toilet block and bathhouse, stables, and a kitchen.

The archaeologists’ report ends with a note that the camp was still divisive in the Alderney community, with some keen to make it into a memorial, while others were concerned it would show the island in a negative light.